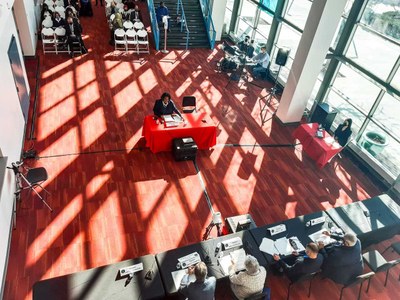 Senator Stavisky, who is chair of that body’s Higher Education Committee, brought the hearing to York College, where Chancellor Félix V. Matos Rodriquez, York’s President, Berenecea Johnson Eanes, and other CUNY representatives, including student leaders, testified before the committee.

Buttressed by her colleagues, Senators James Gaughran  and Andrew Gounardes on one side and Senators John Liu and Leroy Comrie on the other, the veteran Senator Stavisky, listened intently to the testimonies and asked pointed follow-up questions about matters such as enrollment, retention and capital projects.

On York’s behalf, President Eanes testified about launching a “Presidential Commission on Diversity, Equity and Inclusion to evaluate, celebrate and grow “the amazing diverse community found at York.” She also addressed the import of increasing graduation and retention rates; and noted that the former has been inching up over the last three or four years. President Eanes also thanked the CUNY Chancellor for including York’s proposed Academic Village and Conference Center in the CUNY priorities.

“I thank Senator Stavisky and her colleagues, as well as Chancellor Matos Rodriquez and other colleagues and students for coming to York for this important hearing, said President Eanes. “It was a great opportunity for all of us to be heard in advance of the upcoming legislative season in Albany.”