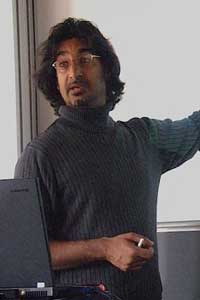 Dr. Nath first became interested in mathematics at the University of Chicago where he attended various courses on group theory and Lie algebras given by Professors Jon Alperin and George Glauberman. After completing a Masters degree at Brandeis University, he returned to Chicago where he completed his PhD in the representation theory of the symmetric and alternating groups under the direction of Professor Paul Fong at the University of Illinois. Dr. Nath has a longstanding interest in math education. He taught math at Bronzeville Alternative High School in the South Side of Chicago and with the Franklin Summer Program (Phillips Brooks House, Harvard University). Originally from the Boston area, he currently lives in Queens.

" A simultaneous core partition walks into a bar " May 20th, 2015: Combinatorics Seminar, Massachusetts Institute of Technology.

" Refinements of the McKay conjecture in the case of the symmetric and alternating groups " April 23rd, 2010: Representation Theory Seminar, CUNY Graduate Center (invited).