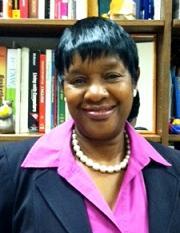 Professor Kinyatti has published numerous articles in reference books. Her research interests focus on gender discrimination and violence against women in Africa, with special emphasis on sub-Saharan Africa (SSA).

Njoki Kinyatti. "Discrimination toward Hispanic (Latino) Americans." Race and Ethnicity in the United States: From Pre-contact to the Present. Ed. Russell Lawson and Benjamin A. Lawson (Greenwood):. 2 2019: 80-83.

" Attended "Leadership Institute for Academic Library Managers." The theme of the conference was to prepare academic librarians to become highly skilled and successful in: planning; making effective decisions; how to implement strategies; how to cope conflict with resolution and how to encourage employees to reach high performance levels: Siena College Institute for Leadership Development, Loudonville, New York " July 27- August 1, 2014: Academic Library Leaders, including those aspiring to leadership positions.

" Attended 11th Columbia University Symposium held at Columbia University. The theme of the conference was, “Leaders Everywhere: Fostering Leadership across the Academic Library Organization,” and the morning keynote speaker was Elliot Shore, Executive Director, Association of Research Libraries (ARL). Mr. Shore discussed the notion of competency trap that is applied to organizations since 1980, and emphasized that it can be applied to individuals. In his Keynote, Mr. Shore also drew on the ARL’s strategic thinking and design process in which he has been engaged and his work in leading with the Leading Change Institute and Other leadership programs. The second speaker, Mr. Jerilyn Veldof spoke about “Leadership Development in Action: Changing Lives, Changing Libraries. In his speech Mr. Veldof shared stories of individual transformation and growth, discussed the impact of leadership development at the library level, and addressed what it takes to sustain a multi-pronged approach for developing leaders across the library. The third session was a panel discussion on “Leaders Everywhere,” led by three people. The discussions covered a wide range of issues, including but not limited to: professional identity, leadership outside of a management role, the role of leadership and/or mentorship on ones’ career trajectory, reskilling, re-engagement with the profession, reinvention, barriers and strategies, the question of self-determination within the confines of an organization, and how to push from the middle. I found these discussions very engaging and informative. " March 21, 2014: Academic Library Directors.

" “You know what you Write, but Do you Know Your Rights? Understanding and Protecting your Rights as an Author,”; Prof. Jill Cirasella, CUNY Graduate Center, New York " March 7, 2014: York Faculty.

" Organized and invited Prof. Jill Cirasella, an Instruction Librarian at Brooklyn College to Present on “Of CUNY, By CUNY, for CUNY: How we all Benefit from Open Access and Why we need an Institutional Repository,” Co-sponsored by the York College Library and the Center for Excellence in Teaching and Learning (CETL);York College/CUNY, Jamaica, NY " February 14, 2013: York Faculty.

" Organized and invited Prof. Jill Cirasella, Instruction Librarian at Brooklyn College to Present on “Of CUNY, By CUNY, for CUNY: How we all Benefit from Open Access and Why we need an Institutional Repository,” Co-sponsored by the York College Library and the Center for Excellence in Teaching and Learning (CETL) " February 14, 2013: Faculty.

" Attended Library Association of the City University of New York’s 2012 LACUNY Institute, held at the CUNY Graduate Center. The theme of the program was “Library Technology and the Future of Libraries: Held at CUNY Graduate Center " June 1, 2012: CUNY Libarry Faculty and Librarians from other institutions including Public Libarries.

" Attended the LACUNY Winter Membership Meeting which featured a presentation by LaRoi Lawton (Bronx CC), “The Library Association of the City University of New York: Its Past, Present and Future Impact on CUNY Libraries,” held at the Hunter College School of Social Work. " Dec. 14, 2007: Librarians.

Memmber of the American Library Association (ALA): .