York Student Gets 'Seat at the Table' in USS

Kesi Gordon, an executive member of York College's Student Government Association, was recently elected to be one of the new members of The University Student Senate (USS) and is officially the Vice-Chair for Technology Fee Affairs.

Ms. Gordon, a History major, said she checked to see what positions she could run for on the USS Board and jumped into the race for the Vice-Chair for Technology Fee Affairs. She sees the role as an opportunity to advocate for students across CUNY.

“Now York will have a seat at the table when it comes to USS,” says Krishna Fnu, President of The Student Government Association 2019 -2020, who shared Gordon’s big news with Interim President Berenecea J. Eanes.

Gordon is excited as she plans to work alongside CUNY students, as well as faculty and members of the Central office of CUNY, such as the Chancellor for Technology, to ensure students’ concerns are addressed.

“The role of Vice-Chair is important to me because I see it as an opportunity to advocate for students and make sure that they have a voice in how their [technology] fees are spent,” says Gordon, a senior. “I want to make sure that students’ concerns are addressed.”

On a smaller, more direct way, she also wants to pass on her earlier college experiences to peers at York, helping them navigate better outcomes in their college career. As she reflected, she said that her motivation for joining the Student Government Association a year ago was to be able to help fellow students.

“I would like to mentor York students to avoid some of the early pitfalls I had as a student,” says Gordon. “I joined Student Government in my junior year because I had encountered problems and I knew that I was not the only student to face those issues. I want to be able to help them avoid making the same mistakes I made. I’d like to mentor somebody.”

Gordon has adopted the words of the now-late Congressman Elijah Cummings that reflect her personal philosophy: “Our pain becomes our passion, which fuels our purpose.” 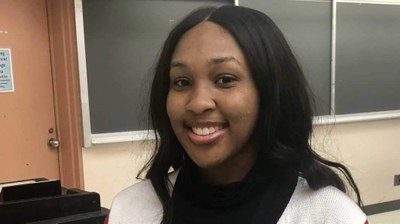