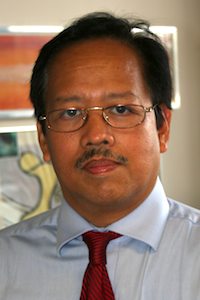 Roberto M. Benedito is Assistant Professor in the Department of History, Philosophy and Anthropology. He is the Coordinator of the Cultural Diversity Program and Anthropology .  He is a lawyer with a Ph. D. in Anthropology (SUNY at Buffalo).  He is a current member of the Undergraduate Research Advisory Council and the York College Common Reader Committee.

Benedito's research deals with law, culture and anthropology.  His area specialty is Southeast Asia particulary the Philippines, where worked as a lawyer and human rights advocate.  He has studied law, culture and legal consciousness among indigenous peoples of the Philippines.  He has published articles on the impact of state and international law on indigenous peoples rights specifically their ownership to ancestral land.  A common theme in his research is the significance of cultural practice in law and legal institutions.

" A Comparative Study of Impeachment Proceedings in Nigeria and the Philippines " May 7, 2019: Keynote Speaker, Initiation Ceremony of The Tau Lambda Chapter Phi Alpha Theta - The National Honor Society in History.

" Impeachment Proceedings: A Comparative Study of Nigeria and the Philippines " April 12-13, 2019: Moderator and Presentor, The 44th Annual Conference of the New York African Studies Association “The 50-Year Ripple: Black Studies - Sankofa Past Present and Future”.

Scholar-in-Residence, School of Law, University At Buffalo, SUNY at Buffalo: 1987-1990.

Conference speaker/Workshop leader: “More Alike Than Different: Why Our Diversity Is Our Strength!” at the SUNY Albany Asia Pacific American Conference sponsored by the Asian American Alliance: March 31- April 1 2017.

Represented Cultural Diversity and Anthropology in the Center for Students with Disabilities (CSD) Workshop on Supporting Students with Testing Accommodations: October 13, 2016.