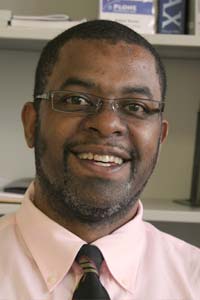 Dr. White’s first book Holding the Line: Race, Racism, and American Foreign Policy Toward Africa, 1953-1961 was published in 2005.  His second book will be an edited volume of the papers of a World War II Chaplain, entitled “On the Battlefield For My Lord: The Papers of Rev. Robert Boston Dokes in World War II.”  In addition to his Ph.D., Dr. White also has a J.D. from Harvard Law School and has taught courses or portions of courses on the impact of the American legal system on society.

george white, jr.. "“Black Joy in the Hour of Chaos: ‘911 is a Joke’ and its Multiple Messages of Resistance in the Trump Pandemic"." The Journal of Hip Hop Studies. : .

george white, jr.. ""I Am Teaching Some of the Boys: Chaplain Robert Boston Dokes and Military Testin of Black Soldiers in World War II"." Journal of Negro Education. 81, number 3 Summer 2012: .

george white, jr.. "Big Ballin’!?: Vice President Nixon And The Creation Of The Bureau Of African Affairs In The U.S. Department Of State." Passport. 3 August 2010: .

george white, jr.. "“The Absence of Evidence: Rationalized Racial Terror in the 21st Century Through the Lens of The Boondocks"." Racism: Global Perspectives, Coping Strategies and Social Implications. 2014: .

george white, jr.. "The Aftermath of World War II and the Rise of Amharic, Masculine Hegemony in Ethiopia." Reconstructing Societies in the Aftermath of War. Flavia Brizio-Skov, ed 2005: .

george white, jr.. ""The Cry of Hip Hop: A Meditation on Childish Gambino and the Perils of American Exceptionalism,"." The Blerdy Report. November 30, 2018: .

" “To Bear Arms, To Bear Our Hearts: Black Soldiering as an Expression of Black Love,” a presentation at the Hine/Horne Book Plenary " September 17, 2020: the Association for the Study of African American Life and History.

" “Foucault’s Liminal Fighters: Race, the Legacy of Black Soldiering, and the Lingering Question of Citizenship in America,” " September 3, 2020: the Association for the Study of African American Life and History.

" “Looking Up at Down:” Chaplain Robert B. Dokes, White Supremacy, and the Struggle for Citizenship in America During World War II, " " October 4, 2018: Association for the Study of African American Life and History.

" The Lord Has Called Us to a Hard Task: Chaplain Robert Dokes, Black Soldiers, and the Practice of Transgressive Citizenship in World War II " December 2, 2009: York College Provost Lecture Series.

" Big Ballin’!?: Vice President Nixon And The Creation Of The Bureau Of African Affairs In The U.S. Department Of State " June 26, 2009: Society for Historians of American Foreign Relations.

" We Held Out Our Eyes, Delirious With Grace: The Meaning and Significance of August 8th as Emancipation Day " February 3, 2007: Association for African American History and Historical Preservation.

“Hope and Commitment: The Deeper Meanings of Juneteenth,” a Speech at the Black Resource Network/York SBDC Juneteenth Celebration: 2020.

“Leaving the Rowboat,” Keynote Address at the 2017 Celebration of the Rev. Dr. Martin Luther King, Jr., presented by the Macon B. Allen Black Bar Association and the Supreme Court of the State of New York: 2017.

“When the Syndrome is Around, Don’t Let Your Guard Down,” a brief history of the band known as Parliament/Funkadelic, for World Music Day 2016: 2016.

“Confronting the Politics of Abandonment: Hip Hop and American History, From the South Bronx to Ferguson, Missouri,” for the York Chapter of NAFME: 2014.

REVIEWER, African Americans in American Foreign Policy: From the Era of Frederick Douglass to the Age of Obama, University of Illinois Press: 2013.

“‘I Get Innervisions Like Stevie:’ Stevie Wonder as Inspiration for Hip Hop Artists,” for the York College Stevie Wonder Symposium: March 2012.

Outside Reader for the "Journal of Contemporary History": November 2011.

Scholarly paper, “Black Christian Soldiers: Reverend Robert Boston Dokes, World War II, and Religion in the Military,” delivered at the annual meeting of the Society for Military History: May 22, 2010.

Chair of the panel “Forgotten Chapters of the Black Freedom Struggle, 1941-1960,” the annual meeting of the American Historical Association: January 9, 2010.

Scholarly paper, “The Lord Has Called Us To a Hard Task: Reverend Robert Boston Dokes, Black Soldiers, and the Practice of Transgressive Citizenship in World War II,” the Association for the Study of African American History and Life: October 2, 2009.