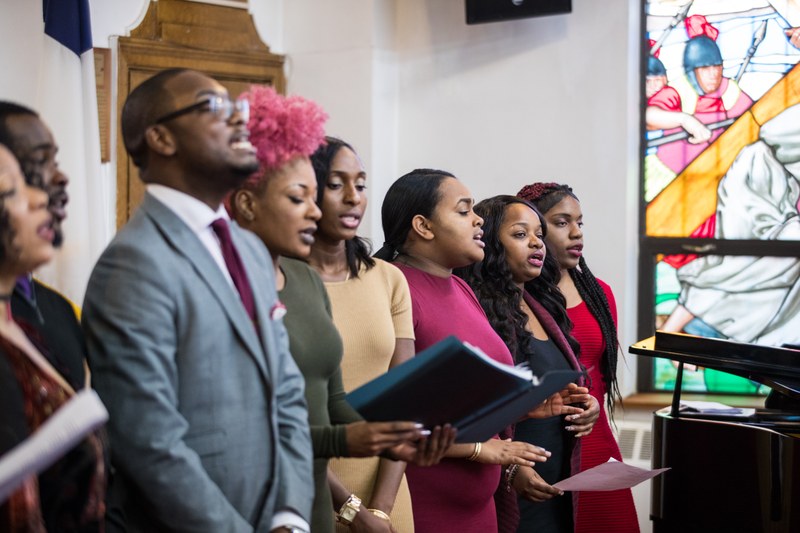 Founded in 2007, the York College Big Band explores large ensemble repertoire including classic big band literature, Latin music, funk tunes and more.  In addition to performances on campus, the York College Big Band has performed at LaGuardia Performing Arts Center, Medgar Evers College, the Poppenhusen Institute, Queens College, and annually at the CUNY Jazz Festival at City College. In April of 2006, the York College Big Band was featured in Weltreisen on the German television station ARD, and in the fall of 2013, the band performed at American Federation of Musicians / Local 802 alongside celebrated drummer Bernard “Pretty” Purdie and harmonica player Rob Paparozzi. The YCBB rehearses on Wednesdays from 6pm to 9:30pm.  For more information or to schedule an audition, please contact YCBB director Dr. Tom Zlabinger.

The York College Gospel Choir, directed by Jonathan Quash, is a performing ensemble that covers a variety of genres.  While the Gospel Choir's foundation is the sacred music of the African American experience, the ensemble's repertoire also include jazz and popular music. The Gospel Choir performs throughout the academic year both on and off campus. (Please note that the Gospel Choir is not offered for the 2019-20 academic year.)

The York College Music Club is open to all York College students regardless of their major.  The YCMC meets regularly during club hours, and hosts a showcase of student talent every semester.

Cardinal Studios is the newest music club on campus at York College. Cardinal Studios is a space where students come together in order to network through the art of music production. The goal is to give every student the experience of producing, distributing and profiting from his/her music; to gain the ability to reach out to other creators and musicians; and to know how to bring them together in order to create something amazing - just as a music producer would.