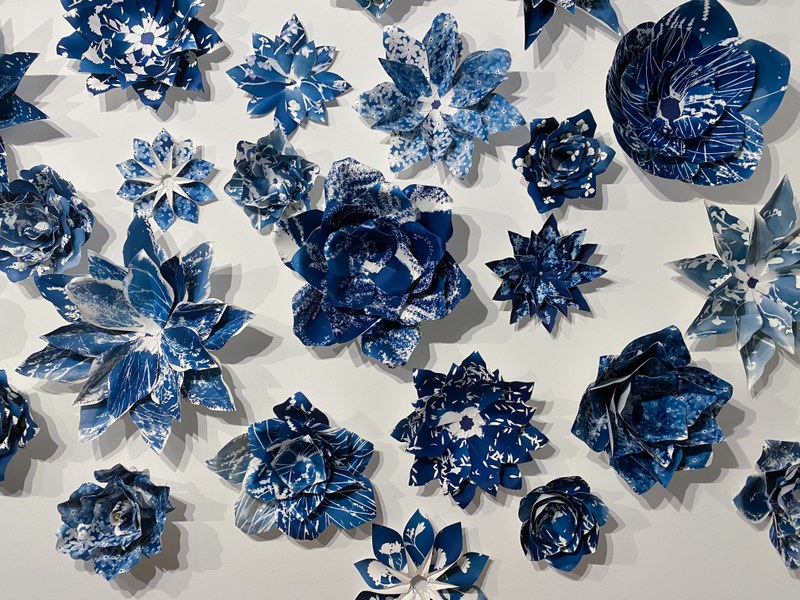 Flores de Femicidio is Natali Bravo-Barbee’s ongoing memorial for women murdered by men in her native Argentina. There were 327 femicides in 2019 in Argentina alone. She begins by researching each woman’s story and gathering an archive for each victim that includes media stories and traces found on social media.

With an understanding of each woman’s history, Bravo-Barbee then hand-crafts a unique 3D cyanotype flower using a camera-less process that incorporates shadow images of lace, flowers and other vegetation. She completes each by attaching a hanging tag listing each victim’s name, honoring the woman and recalling the ancient tradition of placing flowers at the grave of the dead. Each flower can take as long as 10 hours to complete.

The flowers serve as a physical manifestation of each lost woman and drive home the enormous scale of the loss.

“When someone says 327, that is just a number that one may or may not be able to imagine. I have built these cyanotype flowers as a representation of each woman. When one stands in a room with all these flowers, the overwhelming number of them has an impact when a life, a person, a woman is associated with each...In the U.S. the media haven’t adopted the usage of the term ‘femicide’ to describe gender based crimes against women. If they did, it would become apparent how problematic these societal issues are in individual communities.”

Natali Bravo-Barbee (born, Córdoba, Argentina) creates works at the boundary of photography and sculpture, transmuting identity as a subject through imagery and textures. She combines digital and analog processes to uncover lived memories of her family’s flight from Argentina, investigating both post-colonial and feminist topics. Bravo-Barbee holds an MFA from City College and a BA from Hunter College. She lives and works in Queens, New York. Art for the Body Politic