Congratulations to Dr. Clinton Ehidom, an alumnus and valedictorian of the York College Class of 2018!

Dr. Ehidom recently graduated with his MD degree from the Zucker School of Medicine at Hofstra/Northwell’s Class of 2022. He is now poised to start his neurology career at New York-Presbyterian Weill Cornell Hospital as a resident physician.

Based on his hard work and determination during four years at York, Ehidom’s success is no surprise. He came to York College at 16 in 2014, commuted from the Bronx via train, daily, got a campus job, engaged in athletics, led the Pre-Med Club and went from a self-described disappointing high school GPA to valedictorian of his graduating class from college.

Ehidom arrived in New York from his native Nigeria at the age of 12 and started high school in the Bronx. After “letting myself and my family down” academically in high school, he was determined that “would never happen to me again.” And it never did.

At York he found mentors everywhere: with faculty such as Pre-Med mentor Dr. Andrew Criss,  Dr. Jong-Ill Lee, with whom he studied organic chemistry research mentors such as Dr. Francisco Villegas; staff and peers. He studied hard in his class work, found work on campus as a tutor, and graduated at the very top of his class in four years.

He took the MCAT Exam at 18 and passed it on his first try. At 19 he received acceptance into eight medical schools including Boston University and Albert Einstein School of Medicine. He chose Zucker because they made him the best offer while guaranteeing a rigorous program. He decided to focus on neurology there.

“I became interested in the field of neurology because of mentorship and I was fortunate enough to work with amazing neurologists that were passionate about their work and portrayed an exciting image of the field,” Ehidom said. “I fell in love with not only the complexity, novelty, and opportunity for growth in the field, but also the impact a neurologist can have on a patient’s life. My goal is to mentor and empower future generations of physicians, provide outstanding care for all my patients and build a successful career as an interventional neurologist.”

The newly-minted physician is a fine example of the dozens of physicians who completed their pre-med programs in York’s outstanding Biology and Chemistry departments. We wish him a long and successful career. 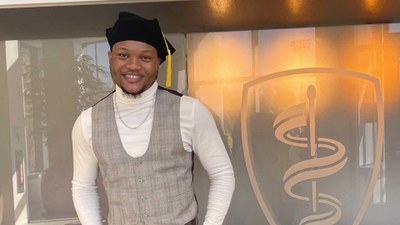