Dr. Truett Vaigneur is a Renaissance man for the twenty-first century. Not only is he York’s CUNY LEADS specialist for the Center for Students with Disabilities,

he is also an adjunct Professor in the Behavioral Sciences department, and host of  the TV show, “Disabilities Redefined with Dr. Vaigneur.” The dedicated student advocate is also an up-and-coming documentarian, producing and hosting short documentaries featuring the abilities of people with disabilities. In spring 2019 Vaigneur researched, produced and co-directed, “Nothing is Missing: Models, Athletes, and Artists” a documentary featuring “four young, energetic, positive, and successful people who are also amputees.”

The documentary features Paralympian Rudy Garcia-Tolson, singer-songwriter Victoria Canal, rock climber Matthew Lynch, and top New York model and actress Jaleesa Graham. Each ‘star’ was interviewed and photographed for the documentary, which can now be seen on the Dr. Vaigneur’s U Tube channel. Additionally, there was a second part of the documentary featuring interviews with CUNY's Queens College's Committee for Disabled Students who used the photos from this documentary in a gallery exhibition for Disability Awareness month on their campus.

Dizzying as that pace was, Dr. Vaigneur also made time to write his first children’s book, Aqua Blue: Visions of a Swimmer, based on the childhood of a paraplegic girl who finds her strength in swimming. He is currently working on his second children’s book and his fourth documentary. Vaigneur also served as a judge for the Ms. Wheelchair USA pageant in Cleveland, Ohio. He has long been an advocate for people with disabilities and has received praise from students who utilize the service provided by his office at York. In the fall of 2017, he created an exhibit in the York College Library, called, “See Us” featuring members of the York College community who have “visible” and “invisible” disabilities.

Asked what motivates his working with people with disabilities, his response was vintage Vaigneur.  “I just like working with people in general,” he said. “That is how I see any marginalized population, just like I would see anyone – we all have varied abilities so I’m not doing anything that remarkable really.”

For more on Dr. Vaigneur’s work see the links here: 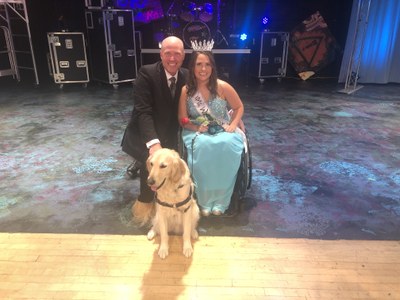