York's Dr. Vaigneur: a Renaissance man for the twenty-first century.

Dr. Truett Lee Vaigneur, a LEADS (Linking Employment Academics and Disability Services) specialist, based in York's Counseling Center suite, loves what he does. 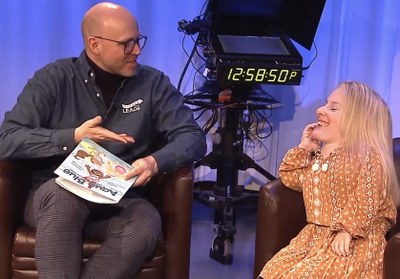 He loves it so much in fact, that he takes the discipline into other areas of his life. Dr. Vaigneur leads with skill and compassion. As one of the originals LEADS Specialists, Vaigneur, who also teaches Psychology 102 at York, says he believes that "careers are an aspect of our identity and  this is true for anyone, whether the individual is disabled or not."

Born “in the Deep South,” Vaigneur spent his childhood and most of his teen years in South Carolina, until leaving for England in his late teens. His first line of work was in the fashion industry, modeling and “doing quite a bit” of background acting when he returned to the U.S.

"Every so often I will get a late-night call from a friend who has seen me in an old TV show and they will be all exited and exclaim: 'I think I just saw you in a party on Sex and the City,' or 'You were just in jail on Law and Order SVU,'”  he recounts.

In fact, the higher education professional is still an active member of the Screen Actors Guild (SAG-Aftra) and gets to vote during Hollywood's award season.  But the excitement of the fashion and performing spaces, while enjoyable, were not sufficient to quench Vaigneur's intellectual thirst and he returned to school to earn undergraduate and graduate degrees from Hunter College and the doctorate at Long Island University. He has published papers in his discipline and received funding for his research.

Dr. Vaigneur started his counseling career helping recovering addicts, then joined CUNY and has been with York ever since. Dr. Vaigneur has been an advocate, activist, and ally for the disabled population, both on and off CUNY's campuses.
He has written two children's books with disability-themed storylines, both of which "have done quite well in sales." His recent children's book is entitled "Flowers, Ballet, Horses and a Kitten" and can be found on Amazon.com. Vaigneur is host of the Manhattan-based talk show, “Disabilities Redefined with Dr. Vaigneur."

"What we do on our show is celebrate and yet normalize the successes of those people who define themselves as disabled,” he says. “Being disabled is not a 'bad word' at all, so we open the conversation to discuss the great work so many people are doing, only focusing on their work and accomplishments." The show can be seen on television every Saturday at 5:30 pm (MNN, channel 34).

As if all that weren’t enough on one person’s plate, Dr. Vaigneur has also been involved with the Ms. Wheelchair USA for the past few years, first as a 'celebrity' judge and now reporting from the red carpet. Asked about Ms. Wheelchair USA, he explained its importance.

“It is one of the most exciting and worthwhile nights of the entire year, not just for the audience but the entire country," he said. "Ms. Wheelchair USA has a potential documentary in the works with Netflix, and Vaigneur will appear in it. The documentary is set for release in the spring of 2022."

Vaigneur is also back in school working on an MA in Disabilities Studies at CUNY's School of Professional Studies. He says, “Disabilities Studies as a subject area is relatively new in academia,” and he wanted to pursue it as a degree.
“I am just doing this degree to learn more about disability history, disability law, and theory,” says Dr. Vaigneur. “Once I get it, nothing really will change. I will just know more."

The York Renaissance man is also on the selection committee for “Reelabilties,” the foremost film festival featuring disability-themed films.  But he doesn’t do any of these additional engagements for resume building. He does them for a far deeper reason.
"Everything I am doing now -- the books, the show, the documentaries, are all for the purpose of advocacy and awareness,” he says. “I will just keep going. It really isn't an option because it is who I am."