The York College Department of Performing and Fine Arts ended its spring theatre season with a delightful performance of "Guys and Dolls." 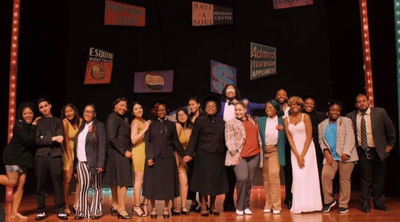 Directed by alumna Miya Bass, who holds undergraduate and graduate degrees from York College, the play took audiences on a delightful journey led by a crooked gambler, a conflicted crapshooter and two young women on the opposite ends of the moral spectrum.

One woman, Miss Adelaide (ably played by Tatiana Felder) is a showgirl wannabe pining for Nathan Detroit (played by JayF. Aseem) the devoted gambler, to marry her after a protracted courtship, in which she lies to her mother that they are married with children.

Conversely, Miss Sarah (played by York alumna Nakiiya Humes-Coleman) is the virtuous church girl smitten with the questionable Sky Masterson, the crapshooter mixed up with Nathan Detroit. One of the most thrilling numbers in the show was Messoloras’ singing of Frank Sinatra’s “Luck Be A Lady.” Quite the apt number for a gambler.

The cast is made up of York undergrads, alumni and professional actors. Under the guidance of first-time director Bass, the play works on all levels. Tony Award-winning Frank-Loesser, Jo-Swerling and Abe Burrows’ play first produced on Broadway in 1950, was a great fit for York College.

In addition to directing the play, Miya Bass joined forces with Christian Marshall on the choreography. We look forward to more directing from Ms. Bass, who several years ago acted in York’s production of “Aida.”

The play also brought out the inner actor in Messoloras, a reserved student playing his first role at York, noted afterwards, “I’m so grateful to her [Bass] for this opportunity, as I made so many new friends and became so much more confident in my ability to grow and adapt.”

As for Bass, known for her acting and singing but not directing – until now, that is -- she is ready for more.

“I am very interested in doing more production from the director's point of view,” she said.  “Acting is still my priority, but I also look forward to directing in the future.”