by Marcia Moxam-comrie — last modified Aug 03, 2021 04:54 PM
Contributors: mbernard
Shaquille Profitt is a student on a mission. The upper senior has interned in the New York Assembly and continues to strive. 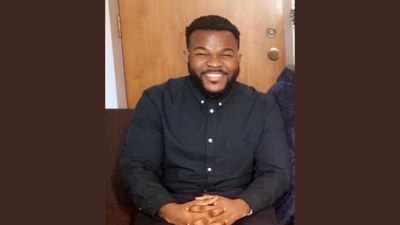 Mr. Profitt, a Thurgood Marshall ambassador for York, was required to write an essay at the end of his Assembly internship. The result was that it was chosen and published as an outstanding example for future interns to pattern.

Apparently, Adjunct Professor Jillian Abbott, one of his English major mentors saw that same potential in Profitt, which led her to invite him and classmate, Autumn Matthews to join her at the Mix 2021 Amplified Publishing Conference at Bath University in England, to present the poem they had created together.

In the end, Ms. Matthews could not attend the conference due to a pressing conflict of schedule, but Profitt held court on their mutual behalf at the conference billed, “Whose Story Gets Told: How Teachers, Publishers, and Other Gatekeepers Can Help Ensure More Voices Are Heard.”

“Under the tutelage of Professor Jillian Abbott, in Writing for Electronic Media (ENG-384), I recently had the opportunity to present a video that [classmate] Autumn Matthews and I created,” says Profitt. “Autumn and I wanted to write to the moment—especially after the tragic death of Daunte Wright,” Proffit explained. “We thought it was compulsory to put pen to paper and express our collective sadness. We wrote a spoken word poem and transformed it into a digital space.”

Profitt represented his partner and the college like a pro, according to his proud mentor.

“They were very impressed with Shaquille,” says Abbott. “They were talking about him after his presentation.”

“Our poem is a call to action, and it provides hope to those discouraged,” says Profitt. “We hope that despite people’s political affiliations, they listen to each other hearts and that by working together to deepen the understanding of race and injustice, change will be on the horizon.”

The future attorney added that their video was honored at the conference—specifically, the publishing and pedagogy conference where the panel explored how innovative and inclusive publishing can support student learning and dissemination of research.

“I wanted to be a part of a conversation that shifts from whether we should tell this story,” says Profitt. “I also wanted to take a radically new approach to digital poetry as being an extension of the 20th-century innovative text poetic traditions.

Profitt says the approach provided poetic license, “and I was able to use my words, images, and sounds as virtual reality, so the audience can see, hear, and empathize as opposed to the traditional spoken word poetry medium.”

He added that the African American experience in America “is mired in racism both socially and legally and while we have carved out a distinct culture for ourselves, we are still struggling for acceptance, and I wanted to give perspective to the Black experience in the poem because our lives become the stories that we tell.”

His experience was a fulfilling one to Profitt.

“I want to underscore that this presentation and the sea of people that were on the Zoom call, made me feel like my story mattered and I am so fortunate to have been well-supported,” Profitt reflected. “I am immensely thankful for all the support that I received from Professor Abbott, who has brought me into the field of digital electronic media and digital pedagogy.”

He says he “feels lucky to have learned from her because I learned skills such as the power of brevity, a skill mastered by a few, and using descriptive language to describe feelings. I hope to use the knowledge and relationships I gained to continue to write about race, ethnicity, class, and disability in society in a way that helps people achieve some sort of justice and live more reflective lives.”

The powerful poem as presented at the conference is accessible here in this video. Congratulations to Mr. Profitt and Ms. Matthews on their outstanding poem and narration!