Durrell Malik Washington, Sr. a Social Work graduate of York College, CUNY’s Class of 2017 is making moves both literally and figuratively in his educational journey.

After graduating from York in the spring of 2017, Mr. Washington went on to earn an MSW from Columbia University’s School of Social Work a year later, publishing an article in the school’s “Social Work Review” journal and is now moving to Chicago to pursue a PhD in Social Service Administration at the University of Chicago.

In the “Review,” Washington, writes on the topic, “Mass Incarceration and its Effects on Black and Brown Individuals.” It is a subject he has been studying since his undergraduate days at York College.

“They [incarcerated folks] are forced into harsh labor conditions with minimal, if any, financial reciprocation,” says Washington in the article. “They are subjected to substandard living conditions as well as mental, physical and sexual abuse.”

“All programs offered me full funding, which included a tuition waiver and living stipend,” said Washington. Asked what the main attraction to the University of Chicago was for him, Washington explained that they have what he was looking for in his PhD program.

“Broadly, my research interest aims to understand the intersections between Criminal/Juvenile Justice, mental health and other systems of care and ultimately how these systems serve as pipelines to the incarceration of black and brown youth and adults,” said Washington. “I have been blessed to gain acceptance into six Ph.D. programs, which from the feedback I’ve gotten is not something that’s easy to do. Many of the schools checked all the boxes that I wanted from a program, but the University of Chicago went above and beyond. If I’m speaking on the faculty whom I’ll have the chance to work with, Dr. Rueben Miller, and Dr. Matthew Epperson were at the top of my list regardless of the school. I now have the opportunity to learn from them both. There are also other criminal justice, and youth violence prevention researchers I’m excited to get the chance to work with such as Dr. Gina Fedock, Dr. Deborah Gorman-Smith, and Dr. Yanilda Gonzales.”

Washington also emphasizes that he “appreciate the fact that all of these professors have such a strong rapport with each other and those I have met with in-person and over the phone, recommended for me to get to know their colleagues.”

Mr. Washington added that no other school “except for maybe one,” had several faculty members whose research aligns with his research interest, like Chicago does. There were also personal concerns that they fulfilled.

“As far as the incentives” he said, “They have the highest base stipend out of all the schools I applied to. For the majority of Ph.D. programs who offer a stipend, that stipend only covers you throughout the months you are in school. The University of Chicago also offers four years of your choice of summer funding at $4,000 a year. They also offer for the five years I’ll be in the program, an unlimited CTA (Chicago Transit Authority) pass, equivalent to our MTA Metro Card here in New York. That was huge for me as being from New York I’m used to taking public transportation and knowing I wouldn’t have to pay for it in Chicago was pleasing to hear.”

The scholar says the university also addressed another important matter in his life.

“A concern I had [in] committing to UChicago was in order to have my son added to my health insurance it would cost around $5,000 a year,” he explained. “This would be a large chunk of my stipend not considering other bills. I expressed my concern to the Ph.D. director of the school. A couple of days later I was provided with resources from the Dean of Students and current doctoral students I could take advantage of to be able to afford my son’s insurance. Seeing their compassion and empathy for my concerns and willingness to work with my needs sold me on a school I already desired to enroll in. UChicago offers the rigorous training you want from a Ph.D. program, but also has the supportive faculty and other supportive students to help make my transition to a new space as comfortable as possible.”

“From York’s baccalaureate Social Work Program to Columbia University’s Master of Social Work Program and now, enrolling at The University of Chicago’s PhD in Social Work program, Durrell is a focused academic scholar, with an intentional social justice vision,” said Dr. Rodgers. “He is well-prepared to meet the rigor of graduate studies. My thoughts about Durrell’s professional endeavors are never, ‘can he do it?, but what will he do next to trail-blaze the way for his peers?’ His life experiences, professional research training and unwavering tenacity accord well with the type of social workers who will lead the profession,” she said.

“Without question Durrell Washington is a scholar enriching the lives of everyone he encounters and creating a legacy few can achieve,” said Rodgers. “Noteworthy, Durrell and I are co-authoring a chapter, “Stalking and Personal Protection Order” (in press) in an edited volume (Dr. Gina Robertiello) Sexual Harassment and Misconduct: An Encyclopedia published by ABC/CLIO.

Durrell also continues to collaborate with Dr. Rodgers and the Queens District Attorney’s Richard A. Brown’s STAR [Straight Talk About Risks] Track anti-violence program with at-risk youth in Far Rockaway, Queens, NY. He is also the lead organizer (with Dr. Rodgers who is the Project Director) for the Mayor’s Office of Criminal Justice/ Mayor’s Office to Prevent Gun Violence 2019 Safe in the City Grant to engage a discussion between York Early College Academy (YECA) and community stakeholders. 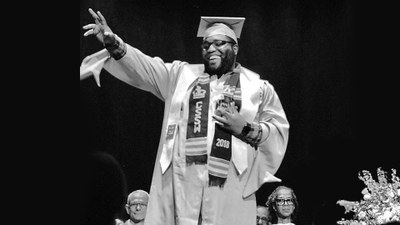