York Set to Feature First Salutatorian in More than a Decade 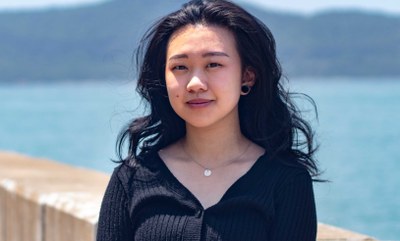 Under President Berenecea Johnson Eanes’ leadership, the practice of featuring a salutatorian in addition to the valedictorian speaker, will resume at York’s Commencements.

Wing Man Ho has been selected Salutatorian of the Class of 2021. The Psychology major will be the first graduate to do so in approximately 13 years, due to the college’s previous suspension of salutatorian speeches In the many years since the last salutatorian speaker, only the valedictorian had been named and featured as the key student speaker.

Born and mostly reared in Hong Kong, Ms. Ho, who informally goes by the first name Vivian, came to New York at the age of 15. She now lives with an aunt and uncle in Woodside Queens, but has been attending her York College classes virtually from Hong Kong staying with her parents.

She credits Dr. David Johnson of the Psychology department, with being her primary mentor.

“I met him when I was in [a] statistics course, and I started to be his research assistant after the course,” says Ho. “He trusted me and gave me opportunities to try. He would share his experience, so we could learn from him and get inspired. He cares about my future even [though] I am not working with him anymore.”

"It’s been such a great pleasure working with Vivian during her time at York,” says Dr. Johnson. “ She was truly a star in the Psychology department. We met when she was a student in a statistics class, where she was an exceptional student and would go on to become a stats tutor. But it was also quickly evident that she had the qualities to be a great student researcher. Not only is she smart, conscientious, creative and hard-working, she’s also one of the most kind and gracious people you could ever hope to meet.”

Dr. Johnson, who holds the PhD in Neuroscience from Weill Cornell Medical College, added that Ms. Ho accomplished a lot in the short span of time they worked on research together.

“She won an award in the Summer Undergraduate Research Program,” says Johnson, whose areas of expertise are Learning, Memory and Emotion. “She helped manage the completion of an NIH-funded research study. And she was literally days away from heading to Boston to present at a major psychology conference when COVID struck. It was an honor to be her mentor, and I’m excited to see what the future holds for her."

In addition to Dr. Johnson, Ho also praises other members of the department and one in particular, has her great admiration.

“I want to thank Dr. Kristin Davies, she says. “I wouldn't have had the courage to ask Dr. Johnson for research [opportunity] without Dr. Davies' suggestions. Not only does she care about the courses we are going to pick for the next semester, but she also encourages students to get as much experiences as they can.”

As for her overall York experience, the salutatorian also has high praises there too. “My York College experience has been great,” she says. “I have met many awesome professors and I have learned a lot from them. They are willing to stay after class to answer students' questions. The students here are eager to learn, and they would help each other throughout the course. I honestly miss York College and miss the time interacting with professors and classmates [in-person].”