From Punjab, India to Queens, New York and from the SUNY-Queens Educational Opportunity Center (EOC) in Jamaica, Queens into York’s SEEK program, where she has thrived and is now a senator in York’s Student Government and a USS delegate.

Arriving from her homeland 20 years ago, Ms. Kaur says she developed heart trouble and deferred her higher education dreams while rearing a family and managing her health challenges. She is now making up for lost time.

Kaur has served as a Student Government senator and participated in numerous co-curricular opportunities. In February (2019), she attended the Black, Hispanic and Asian Caucus Weekend in Albany (New York) as part of the York College delegation; there she met with state legislators and in March, returned for SOMOS, a nonpartisan, nonprofit organization “committed to addressing the needs of the Hispanic population of New York State in collaboration with the NYS Assembly/Senate Puerto Rican/Hispanic.” The organization self-describes as serving “as a platform for legislators, scholars, business and labor leaders to address various concerns pertinent to this community.”

She completed a Model Senate internship as a state model senator from District 5, which straddles Nassau and Suffolk Counties, in the Senate Chamber and was part of the debate on the Marijuana bill. She is also a mentee of the deputy commissioner of the New York City Probation Department, a match made via her L'Oréal USA Headquarters internship.

In 2018 a devastating house fire left Kaur and her family homeless. But she persisted and stayed in school with the support of the college, which provided emergency relief via the Petri Fund, a grant, which supplies emergency resources for students in dire financial emergencies such as that caused by fire and natural disasters.

As a student, Kaur, now in her senior year, uses her life experiences to inform her educational pursuits and has engaged in advocacy both on and off campus. She finds it rewarding after her protracted absence from formal education.

“I felt the need to go back to school and finish my education for myself and for my children,” says Kaur. “I was always top of my classes and got academic awards every year from the Indian Central Government of Education for my achievements. I am very ambitious and determined. So I never gave up on education.”

But before she could get into college, Kaur, who describes herself as “spiritual,” first earned her High School Equivalency (AKA, GED) diploma and took college prep classes at the Center before enrolling as a matriculating student in the SEEK program. The EOC (supervised by York College) experience was more than academic. It also provided enriching off-site opportunities, according to Kaur.

“I went to Capitol Hill with [the] EOC; and went inside the House of Representative for a debate as a student in 2015,” she said. “That same year, I came to York College for my freshman year. The first year was just getting to know about everything at York College; but later I ran in the Student Government elections and I won. This is my third year.”

“I am not surprised by anything as she (Kaur) and I have kept in touch from time to time,” says Ali. “I can share that my heart is full reading about some of the other arenas in which she has gained access and exposure as a York student. She has indeed made us all very proud of her self-assurance, resilience and engaged strength and resourcefulness in representing the college and achieving all that she can -- and has for herself! Nothing has stopped her and I only see great things ahead for her.”

Ms. Ali added that she has brought Kaur back to the EOC as a speaker to inspire other students others as an example of what is possible if they engage fully in the program.

“My family background from India is all about politics and leadership, which I'm carrying on here in the United States,” she explained. “I'm passionate to work with the US government.”

As a Model Senate participant, Kaur was feted – along with other participants -- at an appreciation ceremony at the CUNY Graduate Center in June. She received an award and a certificate of participation from Assembly Woman Maritza Davila. She is also doing another summer internships as part of SOMOS, with State Senator Jessica Ramos and will participate in the spring 2020 session.

Kaur expects to graduate from York in June 2020.  She plans to attend graduate school soon thereafter. In the meantime, she is thankful for the support system she has found at York, not only with her SEEK family, but faculty in her academic departments and others across the campus with mentors such as Dr. Truett Vaigneur, Psychology professor and CUNY LEADS specialist; Dr. Vincent Banrey, VP for Student Development; Ms. Julissa Contreras-Martinez of the Scholarship Center; the TRIO Program; and the Center for Students with Disabilities “for accommodating my heart issues.”

“Ranjit Kaur is a true fighter,” says Vaigneur. “I am Ranjit’s LEADS counselor here at York College. She is motivated and inspired about the future and is dedicated to her career [goals]. She also is a true Cardinal, giving back to the campus community and working in various leadership roles. One quality I really appreciate about Ranjit is her daring, energetic disposition – she is willing and eager to try new things, pursue new goals, and this is a quality that will take her far.” 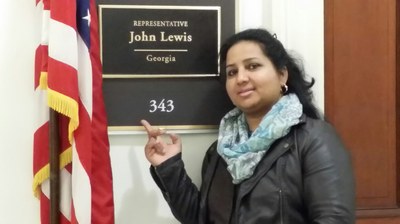