At 1206-strong, the York College, CUNY Class of 2018 was the institution’s largest to date and featured perhaps its youngest valedictorian in its 51-year history.

Clinton Ehidom, a Biology major, who recently turned 20, received seven medical school acceptance letters, including from Boston University and Albert Einstein College of Medicine. Ehidom "went with my heart" and chose The Zucker School of Medicine at Hofstra University.

The Class featured students from 80 nations of birth speaking more than 50 languages. Women comprised 70% of the graduating class and the graduates ranged in age from 20 to 60.

The rainy morning Commencement featured keynote speaker Lysa Scully, general manager of New York’s LaGuardia Airport. Ms. Scully connected with the graduates, sharing that her family was similar to those of most of the graduates’. She is a first-generation American whose parents came to the United States with limited education, limited financial resources, and no English language skills.

“I am looking out at a sea of first-generation graduates,” said Scully. “You have made your [families’] American dream come true. Embrace the unknown; be willing to take smart risks; take a job outside your comfort zone. In third grade I wanted to do brain surgery, today I’m the manager of one of the nation’s largest airports. You will find your passion. Chase it. Seize it. Build your own network; pay it forward and never, never limit yourselves.”

“Make sure you’re not selfish,” she said. “Make sure to make room for others; make sure you are different. God gave you brain power. He didn’t ask about your religion or your color. You are going to be super. Go make some good trouble in the world.”

Ehidom for his part, told his fellow-graduates about his lackluster performance in high school, how badly his traditional Nigerian family took his C+ average and how he changed the trajectory of his life.

“…Long story short, my high school experience was full of failure,” said Ehidom. “But I stand before you today because I turned my biggest failures into my biggest motivation. I remember crying (on the way home) from graduation. I went upstairs look[ed] at myself in the mirror and made a promise to myself that that would be the last time I’d let myself or my family down.”

Ehidom’s beloved mother was not able to travel to New York for her son’s big moment; but she watched it live from her home in Nigeria where she too is a driven scholar, working on a Ph.D. in public administration. But his father, siblings and other family members and friends were out in full force cheering and holding aloft their nation’s flag for their academic version of Usain Bolt.

Among the other special guests President Marcia V. Keizs welcomed to the 48th Commencement Exercises, were CUNY Vice Chancellor Christopher Rosa, who concluded his brief remarks with a spirited rendition of Cab Calloway’s “Hi De Ho Man;” Councilwoman Adrian Adams (28th District); and US Senator Charles Schumer, who once again regaled with his own epic graduation story.

Along with the graduates and families in the audience, there were also members of several alumni classes in attendance for their respective reunion. Members of the Classes of 1973, 1978, 1983, 1988 and 1983 and early faculty enjoyed a luncheon in their honor afterward.

The alumni group included a distinguished alumnus from the Class of 1978. The Honorable Wayne Hall, former three-term mayor of Hempstead, Long Island; and his wife Derrah Hall were classmates who married two days after their June 1978 graduation.

The keynote speaker for the luncheon was Professor Emeritus Leslie A. Lewis, Ph.D., who sang York’s praises and reminded the gathering of the many MD and Ph.D. alumni who got their training in his famous biology lab; as well as other successful graduates from colleagues’ classes. He also remarked on the continued growth of the college since his retirement about a dozen years ago.

“It is of course, as always, a great pleasure to be back at York and to see the phenomenal growth of this institution over the past [13] years of President Keizs’ stewardship,” said Dr. Lewis, a genteel and accomplished scholar originally from the island of St. Lucia. “And I trust that you as alumni are just as proud as I am, of the direction in which your institution has moved.”

See all the photos from Commencement and the reunion 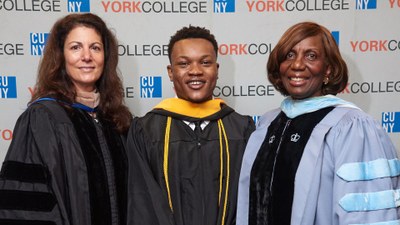