On Sunday September 15th, 2019 members of the Nursing Club, along with Dr. Margarett Alexandre, their mentor, took their advocacy off-campus to help those stricken with the insidious malady.

The attendees were Club President, Jonathan Lopez-Fernandez, Vice President Shamanie Shameer, Secretary-Wilkins Cerda, Treasurer-Kirsten Mckoy; Club members, Chester Chow, Lucy Chen, Shahema Mahalat, Akhil Matthew and Dr. Alexandre. The York group joined over 2,500 walkers, nursing club supporters and volunteers at Pier 17 of the South Street Seaport in raising funds to have a voice with legislators, to access resources and to support research through the mission of Autism Speaks, the largest autism advocacy organization in the United States. According to the Centers for Disease Control, autism affects an estimated 1 in 59 children in the United States today. The Nursing Club Team was proud to raise $547.00 to support the mission of Autism Speaks. 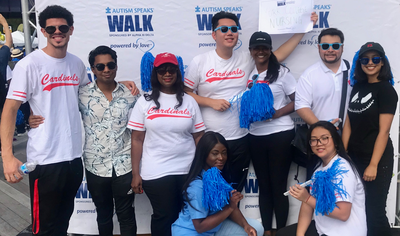