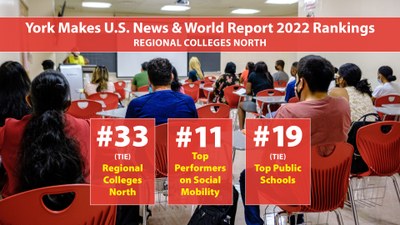 Six senior colleges of The City University of New York are among the top 20 public universities in the northern United States, according to U.S. News & World Report’s latest rankings released today. The magazine also named eight CUNY colleges among the best for social mobility, and cited eight schools for their strong ethnic diversity, offering yet more proof that the University continues to provide access to a middle-class life for first-generation college students, immigrants, students from communities of color and other historically underserved groups.

“These rankings from U.S. News & World Report are further affirmation that CUNY continues to deliver on its historic mission to provide a quality and affordable education for our students, many of whom come from traditionally underserved communities and who reflect the full diversity of New York,” said Chancellor Félix V. Matos Rodríguez. “Despite the challenges of the last two years, CUNY remains one of the most important engines for social mobility across the higher education landscape enabling students to achieve their own American Dream.”

The magazine ranks Baruch College third highest among public universities in the north region. Five other CUNY colleges rounded out the top 20 public universities in the region — including four of the top 10 — Hunter College (5), John Jay College of Criminal Justice (9), Queens College (10), Lehman College (14), and Brooklyn College (18). The College of Staten Island tied for 47-61 on the same list. Among public colleges in the north region (distinguished from universities by U.S. News because they grant less than half of their degrees in the liberal arts), York College tied for 19, New York City College of Technology ranked 21, and Medgar Evers College tied for 22-23.

CUNY dominated the magazine’s social mobility rankings with six of the top 11 public universities in the north region, including Baruch (2), Hunter (3), Lehman (4), John Jay (5), Queens College (9), and Brooklyn (11). CUNY schools recognized as top performers in the same social mobility category for public colleges in the north region are York (11) and New York City of Technology (24).

The 2022 U.S. News rankings also cited six CUNY senior colleges among public universities in the north region for their high levels of ethnic diversity. The magazine uses a formula to create a diversity index ranging from 0 to 1 (1 being the most diverse).
CUNY dominated the list with Brooklyn College having the highest diversity index (0.77) among public regional universities, followed closely by Hunter and Queens (both tied with a ranking of 0.73), Baruch (0.72) and the College of Staten Island and John Jay (tied at 0.70). In the regional colleges north category, City Tech had the highest ethnic diversity ranking (0.73) followed by York College (0.71).

Also recognized as a standout school is The City College of New York, which is listed by U.S. News & World Report at No. 148 on its national universities ranking, 67 overall among the nation’s top public universities, and No. 10 in the nation for its performance in the social mobility category. It also comes at No. 96 (tied) for best undergraduate engineering programs at schools whose highest degree is a doctorate.

The Princeton Review recently also listed three CUNY colleges among the country’s Top 50 Best Value public schools — Baruch (15), Hunter (34), and Brooklyn (35).  Additionally, CCNY, Baruch, Brooklyn, and Hunter were among the best Northeastern colleges in the U.S., while Baruch was also cited for having the 19th  best alumni network in the nation among public universities.

The City University of New York is the nation’s largest urban public university, a transformative engine of social mobility that is a critical component of the lifeblood of New York City. Founded in 1847 as the nation’s first free public institution of higher education, CUNY today has seven community colleges, 11 senior colleges, and seven graduate or professional institutions spread across New York City’s five boroughs, serving over 260,000 undergraduate and graduate students and awarding 55,000 degrees each year. CUNY’s mix of quality and affordability propels almost six times as many low-income students into the middle class and beyond as all the Ivy League colleges combined. More than 80 percent of the University’s graduates stay in New York, contributing to all aspects of the city’s economic, civic and cultural life and diversifying the city’s workforce in every sector. CUNY’s graduates and faculty have received many prestigious honors, including 13 Nobel Prizes and 26 MacArthur “Genius” Grants. The University’s historic mission continues to this day: to provide a first-rate public education to all students, regardless of means or background.