‘Tis the season for good news on York’s Class of 2022 starting with one graduate’s medical school pursuit. 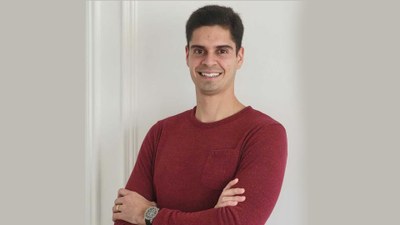 Luis Fernando Tavares, a Brazilian immigrant, who completed his Bachelor of Science in December, has received numerous acceptance letters to attend medical school and has now stopped interviewing. He is seriously considering an offer from Hackensack Meridian School of Medicine at Seton Hall University.

Amongst the other schools that accepted Mr. Tavares as a prospective student were Robert Wood Johnson Medical School at Rutgers University, New York Medical College, and NYU Long Island School of Medicine has wait-listed him due to their small class size. In all, he applied at 13 schools and interviewed at eight.

While living in Forest Hills, Queens, and attending York College, the future Dr. Tavares, who recently moved to New Jersey, worked hard both in his classwork and at earning a living. He sold Broadway tickets on commission in Time Square “no matter the weather,” and eventually found a job as a night doorman in a Manhattan apartment building. He, like so many other students who commute by subway, studied on the train to keep up with his class assignments.

“He was in two of my courses in fall 2018, says Dr. Hua, who has expertise in Neurobiology and in Physiology. “He was truly outstanding in both courses, so I thought that he was a pre-med when he came to my office for academic advisement. I think he will profit from a complete, rigorous study in medicine. I graduated from medical school, so I know that he will enjoy the type of study and the career.

A former athlete, Tavares has worked hard to achieve this moment in his life. He first came to the United States in 2007 to attend Parkland College where he majored in Science on a soccer scholarship. He got injured in the second season and lost his scholarship so he returned home and earned a bachelor’s degree in Physical Education at Centro Universitario de Belo Horizonte.

In addition to faculty and others, Tavares, who is married, also appreciates the sacrifices of his wife.

“The patience of my wife,” he says, has helped me achieve. Often I would come home and find her sleeping on the coach trying to wait up for me.”

“He was well organized for his course work and really spent time for each lab work,” says Professor Hua. In that two courses, he demonstrated the ability of scientific reasoning in his lab worksheets and exams. He thought thoroughly and took all aspects into account. This type of student enjoys studying. With his academic preparation, Luis will not see medical courses as pressures.

Equally important, she says Luis is “very modest, honest and nice.” He treated each piece of work seriously, so I think he will treat his future patients with his heart and will have the ability to handle difficult cases. He will make a great doctor.”

Dr. Derrick Brazill, Provost and Vice President for Academic Affairs at York College, spoke on behalf of the institution.

“We are all incredibly excited for Luis and proud of his achievement,” said Dr. Brazill, a biologist. “He embodies the classic York success story, where hard work and community support lead to amazing outcomes.  We look forward to his future success as a physician.”

Tavares for his part is glad he came to York.

“I am very grateful for York College for providing me with the best opportunities to succeed, and now, for recognizing my efforts,” he says.