Social Work senior Charles Prince spent a month with 11 classmates and their mentor, Dr. Vadim Moldovan in the Republic of Moldova.

This was more than a heightened social work experience; it was also an opportunity to engage in archeological digs, where he uncovered pieces of artifacts dating back 7000 years and was honored to have them displayed in a local museum.

The Navy veteran, who served in La Mata, Italy in the late '90s early '00s, said there were many excursions during the Moldova sojourn - including a six-hour bus trip to Ukraine, where he learned about the Russian author, Alexander Pushkin, of whom there is a statue in honor of his contribution to literature.

"Pushkin was of African descent," said Prince, who is African-American. "So people were looking at me and pointing at the statue. They were excited to see that."

For his main internship, Prince was based at a vocational rehabilitation center, where he participated in doing arts and crafts - painting, sewing, making dolls, etc. He also enjoyed interacting with the children at a community center and became a beloved figure to them.

For Prince, the June 2 through July 3, 2018, study abroad experience was meaningful on every level.

"The food was excellent," he said. "And I picked fruits, learned to make compote, met local politicians, visited monasteries, witnessed a christening plus the trip to Ukraine."

But it wasn't all sightseeing and tactile experiences for Prince and his classmates. There was also a rigorous policy class in addition to 200 hours of internship.

Asked what the object of the internship was, Dr. Moldovan explained that the 29 students he has taken to Moldova since 2012 are required to perform as they would at York.

"[We are] teaching social policy and social work field seminar in the foreign context - rural and urban environment with the maximum exposure to foreign culture, customs, social conditions, social need, community development opportunities, etc.," said Moldovan, who just this spring received a second Fulbright Award. This is the optimal environment for students' self-understanding."

According to Moldovan, students are "almost universally positive" and that alumni of the program now encourage current students to participate in the experience.

"It is definitely an experience that fosters personal maturity and global understanding of social problems," said Moldovan. "The rigor of a foreign environment is a great test of character. It also becomes a centerpiece on students' CV. Charles demonstrated a strong leadership potential. He was intensely involved in all activities. He is remembered fondly by the locals in Moldova."

Prince, who is President of the Social Work Club, and Coordinator of the Fatherhood Initiative (Men's Center), said he also liked the idea of "social entrepreneurship" in Moldova.

"It allows the people to learn the tools to live a life on their own," he said of a program funded by the city. And there is a very low crime rate."

As for the most memorable part of the experience? "The kids," he said. "They really broke me down." 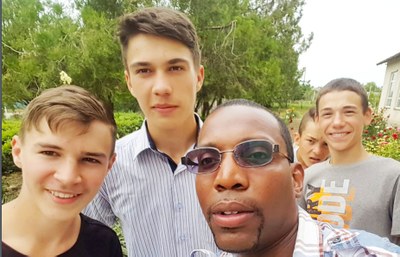