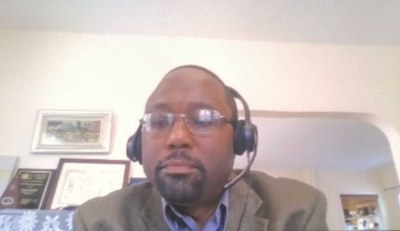 Dr. Sharpe, an associate professor of Political Science, at York College, supported his brilliant adjunct colleagues of the department as they discussed the role of NATO, the European Union, the United States, and the media in Russia's war against Ukraine.

Professor Sharpe began by reiterating what is going on with Russia and Ukraine by reading from the Council on Foreign Relations. “Russia launched a full-scale military invasion into the Ukraine on February 24, 2022. The war has now led to thousands (more than 20,000 as of late April) of civilian deaths and pushed millions to flee to neighboring countries. The majority of whom have found refuge in border countries such as Poland, Romania, Moldova, Hungary, Slovakia and reportedly, even Russia.

The three panelists then shared their perspectives.

“The violence against the Ukrainian population is the responsibility of the Russian government” said Robert Chaouad, an adjunct assistant professor for political science. “So, for me, the person and the country that created this disaster that created '3.5' million Ukraine refugees, this responsibility belongs to Russia,” he said.

Professor Chaouad continued by detailing the role played by western countries, as well as those in North America. He believes that the expansion of NATO to Eastern European nations is one of the key reasons Russia opted to invade Ukraine. When Russia took Crimea from Ukraine in 2014, the crisis between Russia and Ukraine began. President Vladimir Putin of Russia justified the invasion in a speech a few days before the invasion, saying that if NATO expanded to Eastern European countries, particularly Ukraine, it would be a threat to Russia's security.

Putin's key argument is that western countries (NATO), particularly the United States, failed to keep a promise made in the 1990s, namely, that NATO would not extend to Eastern European countries. Many diplomats, particularly in the United States, were opposed to NATO expansion in the 1990s. In 1997, 50 experts wrote President Bill Clinton a letter stating that expanding NATO was a bad idea. During this time, President Clinton was willing to give NATO membership to three Eastern European countries.

George Cannon, the father of containment policy during the Cold War, stated in an interview at the end of the 1990s that if Ukraine joins NATO, it would be a potential cause of war with Russia. Clinton, on the other hand, thought differently. As a result, three Eastern European countries joined NATO in 1999. Other Eastern European countries joined NATO five years later, in 2004, including Estonia, Latvia, and Lithuania, and then Poland and Hungary.

In 2008, a NATO summit was held, which was George W. Bush's final summit as

President of the United States. The issue that was offered during this summit was that Ukraine and Georgia may become NATO members. Some European countries, such as France and Germany, were opposed to the proposal, although President Bush supported it. They offered Ukraine and Georgia membership in NATO in the final statement issued at the end of the conference. This was the point at which relations between Russia and Western countries began to shift for the better.

This was the point at which Russia began to shift a portion of its foreign policy toward Western Europe and the United States. After the Summit, the Russian army took control of some territories in Georgia, a kind of preparation for what happened to Ukraine in 2014.

Professor Chaouad thinks “the expansion of NATO was really interpreted in Russia and by the Russian Government as a threat to the security of the country.”

Dr. David Palazzo, discussed what roles should be played by the intellectuals and how public intellectuals talk about the responsibility of the US in engaging with what is a crime of aggression and moral atrocities.

“The role of intellectuals is to raise difficult questions and challenge some widely held assumptions so that we can pursue the truth as Socrates would like,”  said Sharpe.

Edward Said, who was a public intellectual and academic, believed the responsibility of intellectuals is to tell the truth to the best of one’s abilities; and to publicly raise embarrassing questions and confront orthodoxy and dogma.

Dr. Palazzo conducted a sample, starting with some non-traditional news media that would fit those Said would put in a position to represent the public intellectual. The first section is the premise, which is Russia's involvement in an aggressive crime. It invaded a sovereign country in contravention of the United Nations Charter (Article 51) and the Nuremberg precedent.

Two well-known activists, Medea Benjamin and Nicholas JS Davies, said diplomacy for Ukraine is spelled M-I-N-S-K, Minsk agreements, which are the only realistic foundation for a peaceful conclusion. The State Department's perspective, as well as traditional intellectuals who support the US position, would immediately conclude Putin cannot be trusted or that Minsk’s collapse is Russia's responsibility.

Dr. Palazzo also discusses the idea of Richard Falk, an international law scholar who clearly blames the United States. He claims that the US's militaristic strategy has resulted in a slew of bad effects, including food insecurity, an energy crisis, and a potentially devastating worldwide recession.

“If people misbehave in some ways, if they do things they’re not supposed to do, Media could be one of the tools that can speak up and make it public so it can shine light on things that happen” said Dr. Esther Verhalle, an adjunct professor of sociology and political science at York.

Dr. Verhalle spoke about the role the media plays in democracy and in war. The media's various duties in a democracy include providing information and educating the public on issues of public interest so that people can make decisions and participate in the governance of their country and democracy. The media is not meant to be biased; it is required to cover a variety of viewpoints. Media also serves as a watchdog.

However, the role of the media can shift tremendously when it's not a democracy. Russia, like many other authoritarian states, has become more authoritarian under Putin. Slowly but steadily, it becomes evident that people are making fewer decisions and that public participation was decreasing. During times of internal conflict, tension, war, and authoritarian regimes, sine media outlets serve as a tool of censorship and propaganda, with the government deciding what information people should receive. Censorship is difficult, but self-censorship is even more difficult, where people are frightened to speak even if they have the knowledge to do so, as has been witnessed among Russian journalists.

Russia’s Parliament has passed new laws that Russian media is not allowed to call the war a war. They have to call it a special military operation.

“When I was in Russia, covering the war in Chechnya, that was also called a special military operation and as foreign media I was still able to call it a war,” Dr. Verhalle said. “I was able to call that by its name which is no longer possible. Most foreign correspondents have left. Russian journalists are afraid to do their job at this point, so on the ground, in Russia there is a lot of tension, in addition to all the atrocities that is happening on the ground in Ukraine.”