Professor Sharpe Takes His Scholarship on the Road and Elsewhere

The fall semester of 2022 has been very busy for Professor Michael Sharpe of York College and the Graduate Center/CUNY. 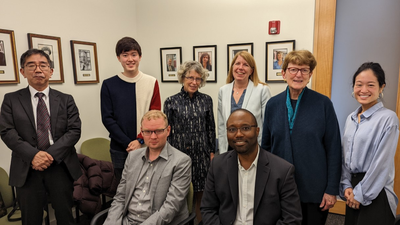 Dr. Sharpe, front row, right, with colleagues at one of his guest presentations.

During the summer, Dr. Sharpe (front row, right in the photo at one of his presentations) did research for about a month in Spain and traveled to South Korea as a Study Tour Fellow for the “Bridging the Divide Seoul Study Trip,”  sponsored and funded by The Maureen and Mike Mansfield Foundation and The Korea Foundation, Seoul, South Korea,  July 17-23, 2022.  Dr. Sharpe presented his paper “Paid to Leave: Selecting by  Unemployment and Ethnicity in the Liberal Democratic States of The Netherlands and Japan 1985-2011” American Political Science Association Annual Meeting, Montreal, CA, September 15, 2022.

Professor Sharpe is a political scientist and an internationally recognized expert on the politics of international migration and comparative immigration studies.   In the last three months, he has been invited to speak and give analysis and insights from his research at three very prestigious institutions: Cornell University, Harvard University, and Wesleyan University.  Professor Sharpe was a discussant for a conference entitled “Migration, Ethnicity/Race, Gender, and Labor Market Inequality in Sub-Saharan Africa & the Asia-Pacific Region Conference” at the School of Industrial and Labor Relations (ILR School) at  Cornell University, Ithaca, NY, October 6-7, 2022.  He was an invited guest speaker at Harvard University and presented on "Racism and Anti-Racism in Japan: A Comparative Perspective" for a (Hybrid) panel on “Immigration, Refugees, and Race in Japan: A Turning Point?”  with  Nicholas A.R. Fraser and moderator Christina L. Davis, Program on US-Japan Relations, Weatherhead Center for International Affairs, Cambridge, MA, Harvard University October 24, 2022. Dr. Sharpe was also an invited speaker on the same topic at the College of East Asian Studies at Wesleyan University, Middleton, CT, on November 10, 2022.

Additionally, Professor Sharpe was interviewed with other CUNY Graduate Center Experts on their assessment of the 2022 elections and the consequences for U.S. politics and policy and the future of democracy. November 9, 2022. Graduate Center Experts. Moreover,  he was quoted in a Newsweek magazine article with other immigration experts in an article entitled “Border Patrol tracking Migrant Caravan as Midterm Race Hits Home Stretch” by Katherine Fung on 10/31/22.  Newsweek Border Patrol. This year he was also a winner of a BRESI award for the second book he is writing “The Politics of Racism and Antiracism in Japan” under contract with the prestigious Cambridge University Press.