Marie Santana-Nath In Celebration of BHM 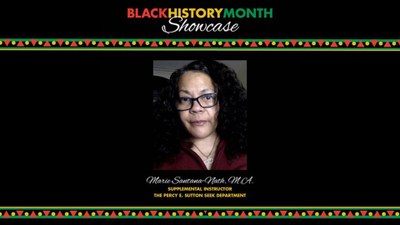 We are featuring a piece written called "The Price of Educational Wealth" an in-depth view of history and the world we live in today.

"I often question if generation Y and Z are aware of African history’s timeline and the abundance of knowledge, skill, and contributions left behind by our ancestors. While these two generations witnessed a Black man become President of the US twice, are they aware of how long that process took?

Perhaps, Barack Hussein Obama researched the resilience of a young Shirley A. Chisolm who left a seasoned legacy of hope and prosperity as the first Black woman elected to Congress and to run for U.S. President. I remember my mother’s excitement reading the article in the Amsterdam News. She was excited to see a black educated woman reach for sameness."

"However precious those memories are today, when I read or listen to current news, the disparity continues to grow among marginalized communities. What would it take for a nation of clear-minded actors in Congress, the courts, and in the Senate to break what appears to resonate as impractical leadership, and offer more balance and unity? Ending disparate treatment is essential to all humans to gain a decent level of economic and social progress."

" Society is moving forward towards inclusivity. A progressive attitude and the will to invest time to learn is important. For instance, what hurdles did Barack Hussein Obama and other distinguished African Americans, face in regards to their fight against social injustice? Let’s not forget how educational wealth moves beyond the usual three, MLK, Harriett Tubman, and Sojourner Truth. The Black History timeline offers learners life lessons, factual historical content, and a wealth of printed and oral information that once was unavailable. Thanks to a generation of resilient, determined ancestors, researchers, and scholarly educators, our story can be found more abundantly on many platforms such as audiobooks, films, and documentaries that are copyrighted. A large catalog of historical data continues to be compiled and formatted to share with young minds, our students, and educators. Historian, Dr. Henry Louis Gates Jr., a scholar in his own right has shared with the world information about the African experience by way of Public Access Television, (PBS) and as a research and teaching professor at Harvard University. Many other significant African Americans before him paved the way so that his academic expertise would offer as it does, a steady stream of discourse and knowledge. What learners can discern is that the pervasive act to disenfranchise the Africans roots, culture, and wholeness arguably delayed progress. Subjecting African ancestors to involuntary servitude did not in all break their spirit or tenacity to think, develop, or execute ways in which to offer progress in these United States and abroad. Potentially, while laws and Black codes existed, freed persons adeptly surpassed their condition, made the journey, and revealed just how tenacious and determined they were contrary to what was deliberately omitted in textbooks during my childhood. Although Africans and Black Americans orchestrated ways to bridge the gap, towards the North Star, we cannot forget or discount the many lives lost or subjected to inhuman treatment by the colonizers."

"I fondly remember a former Professor of History explain to the class, if you cannot turn your head back to the past and search for the truth, you cannot effectively move forward towards the truest form of self-reliance. Part of intellectual and social growth requires that each person show a desire to seek truth and understand the dynamics of the social system in which we live. Most of my early learning experiences were taught by my maternal grandmother. She provided a wealth of visual and oral knowledge. She taught me about the Civil Rights Movement and the divide between class and race when I was in middle school. Grandmother would take me shopping on Jamaica Avenue where we would end the day at the Woolworths lunch counter. At first, I did not understand why we had to sit at the counter instead of what looked like comfortable seating in the back of the luncheonette. She explained how numerous students formed sit-ins and non-violent demonstrations some months ago so that we would have the right to sit where we wanted. Grandmother, an active member of the NAACP, then began to explain more about inequality. She would take me into New York City and there I would visually see how well dressed the pedestrians gleamed in their Sunday best, and how few looked like us. I also saw the difference in how unspoiled the shops were with dancing lights, organized shelves, and how lifelike mannequins dressed in the window seemed to draw the shopper inside. During a separate shopping experience, we stopped at a toy store. Once inside, I noticed there were lots of dolls, some made of porcelain and some made from cloth. I did not see any dolls that represented our race. I thought to myself, the shopkeeper was expressing inequality. I can still remember going home and questioning my mother on why white dolls were more liked than black dolls. I asked my mother why the store did not have a doll that looked like me."

"My mother and grandmother did not quite know what to say at that moment. Mother explained how society can be unfair and exclude because of their fears and lack of understanding. She said that I was beautiful and it was the store owner’s loss not offering a variety of dolls for girls to enjoy. Later that month, I was given the most beautiful Black doll made especially for me by my Aunt. She made the doll from material scraps left over from a cocktail dress she had made earlier that week. She used black yarn for the hair and brown leather-like material for the body. You see, she was enrolled at City College and read some research on Psychologist, Dr. Kenneth Clark’s Doll experiment. School-age children were examining if they preferred a white doll over a black doll. My Aunt explained that although the world appeared biased I would have to move past the ignorance and seek education, learn from my experiences, and read more about history especially Black History achievements. She also echoed how I was beautifully made. I was learning and I could not wait to discover more about my ancestors and other famous Africans."

"The local library did not offer enough extensive reading on Black history. Ebony, Jet, and RIGHT ON! magazines were cool but my Aunt said I should read more literature, more books that contained fewer pictures, and look at less T.V. In my community a 1960’s household did not have computers, the internet, and sadly, most T.V sets were black and white with 5 viewing channels. To add, there were fewer organized school field trips in Queens offering the African experience."'"My Aunt frequently visited the Countee Cullen Library in Harlem. I was around 12 at the time and was not able to attend her excursions My parents did not want me wandering around Harlem due to some unsavory activities in the area. Besides my Aunt did not have the time since she was writing her dissertation. Subway fare was about thirty-five cents. We lived in a two-fare community and besides, I did not have a paying job. The alternative to joining grandmother in the parlour was a no brainer, especially since I would be offered her ginger limeade and sugar cookies. Grandmother was proud and did not reveal much about her struggle. I believe she was shielding me from the worse. Eventually, these sessions would offer insight and become more transparent." "I did not find out until my freshman college year that my grandmother was a 1929 graduate from Howard University. She believed she was not accepted into a white school because of her race or quota. Upon graduating with a degree and State license in Nursing, obstacles and the divided line still existed. She was determined and eventually moved north to New York where she was offered an R.N. job. She eventually moved up to head nurse in her unit before retiring in the sixties. Although in her time, Negroes as a society then identified as Black America, were marginalized and often struggled to reach social and economic parity. She worked long hours eventually purchasing a house, a car, in addition to traveling abroad. She taught me the value of saving, investing, and of course decision making."

"Employment during and after the Civil Rights Act was passed was difficult for many adults like my father and Grandfather George. Grandfather, a college scholar was struggling to maintain economic wellness. He was self-employed, selling clothes, and often did house painting & handy work. It wasn’t until he enrolled under the HARYOU-ACT, completing the program & earning a certificate, a shopkeeper hired him as an entry-level accounting clerk. I dare say that this was in any way near equality, however, it kept his family in a home, and everyone’s stomach full each night before bed. This memory has taught me how important it is to have a balance between education and secure employment. I also began to see how the economy and how neighborhood households were changing. During my college days, visits to the Schomburg in Harlem and the 42nd Street Library, I could not believe the many floors of books, high ceilings, and plentiful seating areas in comparison to the Harlem library. During my excursions to both libraries, I would walk around the neighborhoods and unofficially compile an assessment of the communities and their differences in comparison to Queens. My community was changing and I was gaining wisdom and interest in why."

"White flight in my community was evident. White neighbors were moving out of neighborhoods such as Rosedale and Laurelton towards Long Island. The white homeowners sold their homes and ran to communities where red-lining and corrupt realtors placed restrictions delaying such homes to minority families. Segregation did not end. This brings me to this memory. Grandmother shared how my Uncle who served in the US Army 369th infantry, a segregated unit was fighting a war but was treated as a second-class citizen. How could any war be won if US citizens in the Army were segregated?"

"Integration in all social areas for African Americans was and remains a measure of progress. Thanks to numerous visionaries and educators, I have continued to learn something new each day, communicate with others about the necessity to remain self-reliant and to share my copious abilities"

"African Americans must choose to excel despite the uncertainties that may arise. No one person can take away our knowledge, or our drive to produce quality work. We must choose determination, not despondency. Yes, obstacles will be inevitable, yet it is our responsibility to be ‘woke’ in the world. We have contributed in the past, scientific research patents, won Nobel Prizes, and much more. Our victories were delayed by Jim Crow and similar laws alike, yet we still have ownership of our unique contributions. Although disenfranchisement continues today despite the many milestones towards federal mandates to equally improve equal education, employment, housing, and healthcare It is our responsibility to move forward the fight using our pen, our, vote, and education. African history will not die out but offer a road map where we continue to move African discourse further."'

"How will you broaden your horizon?"

Thank you, Maria, for this heartfelt piece of history!