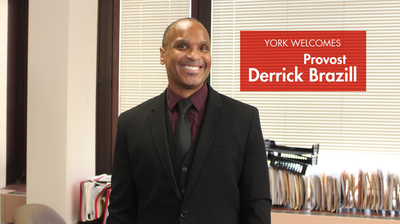 Share on Twitter Twitter Share on Facebook Facebook Email Email
Dr. Derrick Brazill has been named Provost and Vice President for Academic Affairs at York College, after having served as Interim Provost at the College since August 2020. “While serving as Interim, Dr. Brazill successfully moved forward important programs and initiatives that strengthen York College and I am so pleased that students and faculty will continue to benefit from his leadership,” said York College President Johnson Eanes.

Dr. Brazill earned his BS in Biology from Stanford University and a Ph.D. in Molecular and Cell Biology from the University of California at Berkeley. He has received several honors including being the inaugural speaker for the “Lecture in Mentoring Excellence” at the National Institutes of Health and he is the recipient of the Presidential Early Career Award for Scientists and Engineers, “the highest honor bestowed by the U.S. government on outstanding scientists and engineers beginning their independent careers.”

While Interim Provost at York College, Dr. Brazill, established the Accelerate Complete Engage (ACE) program on campus and secured $500,000 in federal funds for York STEM Academy; augmented USIP co-curricular Booster Workshops in Chemistry, Math, and Biology as well as supported the development and creation of a co-curricular writing salon. He supported the restructuring of the Advisement & Scholarship Center to a caseload model to better serve students and partnered with CUNY in public-private initiatives to connect students to in-demand careers by creating a micro-credential in Marketing and embedding Advising and Industry Specialists in the Business and Economics department. He worked with CUNY to develop 4+1 programs leading to an MS or MPH and successfully applied for $2 million in federal funding to provide equipment and resources in support of a Holistic Study on Health Disparities. “These accomplishments, which tremendously benefit our students,” said President Johnson Eanes, “are in addition to expanding partnerships with Queens-based Organizations.”

Prior to joining York College, in his 21 years at CUNY’s Hunter College, Dr. Brazill led a productive, federally-funded research program studying the regulation of cell adhesion and motility, an important process that becomes dysregulated in diseases such as metastatic cancer and atherosclerosis. For over 15 years, he was the Director of the Maximizing Access to Research Careers (MARC) Program, a National Institutes of Health-sponsored program designed to increase the number of underrepresented minorities pursuing Ph.D. degrees in the biomedical sciences. As Chair of the Department of Biological Sciences, he oversaw the restructuring of the major and a consequent doubling of the number of students pursuing it.

“York is on a positive trajectory, and I am confident that Academic Affairs will continue to thrive under his leadership. As a key member of the cabinet, he will work diligently, together with colleagues, to increase collaboration across departments and programs in support of enrollment and student success,” said President Johnson Eanes.