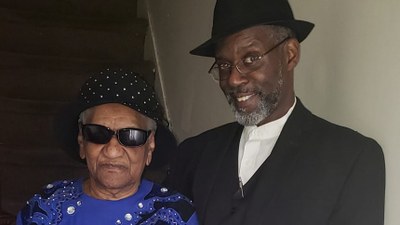 Faculty member, David Campbell, has shared some beautiful words about his mother and their history at York College!

Why is a male faculty writing a story on Woman's History?

I am writing this story on behalf of my mother, Joyce Campbell. She recently turned 88 years old and is a York College alumna. She was a single parent when she attended York College. She had five of us. She managed with four boys and one girl with all the parenting skills of Harriet Tubman.

I need not mention our names. She completed her education and became a registered nurse. She protested when there was an attempt to close York College, and the students won. She told me how the students raised money, made flyers, and rallied the surrounding community to support their efforts. Knowing that history I followed her example and attended CUNY at Queens College and completed my bachelor’s and then master’s degrees. Had it not been for her, my life may have taken a completely different turn for the worse.

I became a security guard at York when it was opposite Rufus King's Park, on Jamaica Avenue. Now, I am a faculty member of the Continuing Education Department at York College Learning Center. So, my mother may not ever make history living on the fringe of this community, but she deserves recognition during Women's History Month.

Love you, Mom! I remember.