Letitia James, Attorney General for the State of New York, will deliver the 2019 York College Commencement Address on Friday, May 31.

Her office handled over 32,000 constituent complaints and passed more legislation than all previous Public Advocates combined, including a groundbreaking law that banned questions about salary history from the employment process to address the pervasive gender wage gap. Ms. James successfully took on the gun industry by pushing New York City’s largest pension fund to divest from gun and ammunition retailers. She fought in court on behalf of children and families on issues including children in foster care, children with disabilities, and tenant protection. New Yorkers overwhelmingly elected Tish James to a second term as Public Advocate in November 2017.

Prior to serving as Public Advocate, Tish James represented the 35th Council District in Brooklyn in the New York City Council for ten years. As a Council Member, she passed the Safe Housing Act, legislation that forced landlords to improve living conditions for tenants in New York City’s worst buildings. She helped uncover the corruption behind the Office of Payroll Administration’s CityTime contract, a scheme that cost New York City over $600 million. She also pushed through a revolutionary recycling package that included expanding plastic recycling, a new clothing and textile recycling program, and increased access to recycling in public spaces.

Before her election to the City Council, Tish James served as head of the Brooklyn Regional Office of the New York State Attorney General’s Office. She resolved hundreds of consumer complaints and investigated predatory lenders who preyed on first-time homebuyers. She assisted the Civil Rights Bureau in its investigation of the NYPD’s stop-and-frisk policy and cracked down on firms engaged in deceptive business practices including violations of human rights, environmental laws, and scams targeting immigrants.

Tish James began her career as a public defender at the Legal Aid Society. A proud Brooklynite, she is a graduate of Lehman College and Howard University School of Law.

The York College Commencement Exercises will take place on the Health and Physical Education field at 9:00 am on May 31 with more than 5,000 family members and friends expected to attend in support of the graduates.

For more information about the ceremony, please visit https://www.york.cuny.edu/commencement 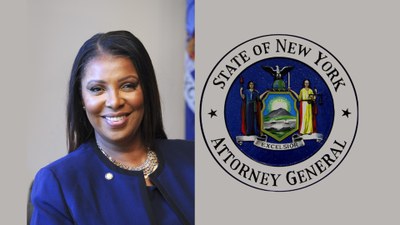 Letitia James, Attorney General for the State of New York