Katherine Roman, the Valedictorian of York’s Class of 2021, may have traveled a circuitous route to her college degree, but she has finished on top and even made history as the first Anthropology major to do so. 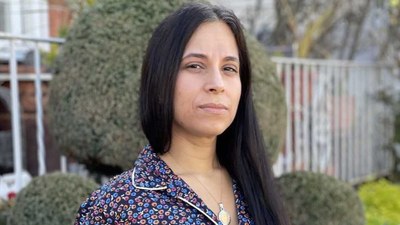 “My educational journey has been indeed untraditional – filled with starts and stops when real life got in the way,” she explained. “As a high school graduate, I attended Stony Brook University (SUNY), but at the end of my freshman year, my brother passed away due to a tragedy. To assist my single mother, I began working closer to home and enrolled part-time at Lehman College in the Bronx.”

Roman says she eventually stopped school altogether when she had her first child a year later. Not long after, she began working at Columbia University, where she qualified to apply to the School of General Studies. But after losing that job, the employee scholarship went away and she could not afford to pay the high tuition. “That’s where I thought my story would end,” she recalls thinking.

But Roman’s destiny would not be denied. “I mulled over the idea of returning to academia to achieve a life goal for many years", she says. “I was filled with self-doubt and worried about my ability to compete; nonetheless, I enrolled and started attending [York] in the fall of 2019 and am so happy I did. I faced my fears and attained an exceptional top honor. I’m the first in my family to graduate with a bachelor’s degree. The sense of accomplishment is incredible and very fulfilling.”

The busy mom of three, one of whom has special needs, says it never occurred to her that she could be in contention to be valedictorian. Wisely, she connected with professors and sought advice that set her on that path. And then the shutdown happened.

“Unfortunately, York went into lockdown during the middle of my second semester, limiting my ability to form long-term relationships at York,” she says. “During the first semester, however, Dr. [Robert] Parmet always left his office door open and offered listening ears in addition to his remarkable insights. Also, Professor Yonhong McDowell, my statistics professor during the second semester, helped me immensely. I genuinely believe I would not be here if not for her patience, excellent instruction, and care. Dr. [Roberto] Benedito, my academic advisor, has also been integral to my successful completion of academic requirements. Each professor during this journey has imparted no small amount of knowledge for which I will be forever indebted.”

“She is a wonderful person as well as a student,” says History professor Parmet, interim chair of the Department of History, Philosophy, and Anthropology. “Her presence in the front row of my History 201 section brightened the classroom. It was a distinct pleasure to teach someone with her interest in the subject matter, ‘Early United States History.’  Accordingly, her academic performance was extraordinary. I congratulate her [on] her selection as valedictorian and wish her only the best beyond York.”

Asked what her post-graduation plans are, Roman says she’s planning a trip to Puerto Rico, where she hasn’t been since she was six years old. “I feel ancestral spirits calling me back home,” she says.

The superstar grad says she also has her “sights set on attending graduate school at Queens College’s program in Applied Social Research.” But for now, she is actively pursuing work and internships in cultural institutions such as museums and non-profit organizations with grassroots origins.

“I hope to incorporate my love for cultural arts while applying the skills I’ve developed as an anthropology major to address the holistic needs of our changing, increasingly globalized world,” she says. “In my view, Cultural Arts contribute to social and ethnic cohesion as well as cultural self-esteem and identity.”

Roman is an active supporter of the Stuttering Association for the Young (SAY). Her son, she revealed, “has a speech impediment which led me to find this amazing organization. They use theatre arts and the magic of creative expression to build confidence and community for children who stutter. I have a slight speech impediment myself and was greatly inspired by their work. Through their wisdom, I learned that my voice was important, and my words were valuable. They gave me the extra push I needed to attend York and realize this dream.”