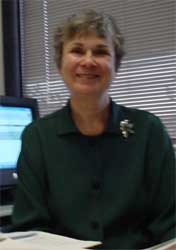 Carolyn Kirkpatrick is Professor Emeritus. Professor Kirkpatrick served as Department Chair from 2001 to 2007, before retiring at the end of 2007.  An important early advocate of writing process pedagogy on campus, she was instrumental in the creation of the College’s first effort at Writing Across the Curriculum (WAC) in the 1980s, and in the formation of the current WAC Program begun in 2001.  She was the College’s first WAC Coordinator, and led the annual WAC Faculty Seminar through its early years. She helped found the Writing Lab on campus, a student support center that later became the Writing Center, and founded the College-wide Writing Program, an independent academic program at the College, serving as its first coordinator.