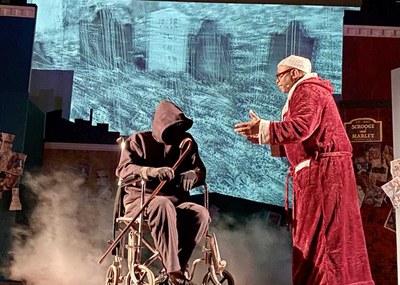 Theater Arts Professor Thomas Marion’s version while loyal to the Dickens’ story of the stingy, Christmas-hating bachelor, was more “wave your arms in the air like...,” than “bah humbug” for theater lovers, throughout the weekend of December 3.

Inspired by Lin-Manuel Miranda's "Hamilton," Marion’s hip hop tour-de-force of a production, showed audiences that what’s old can be new again told in a new way; and with a diverse cast to boot. Billed on the program as "OG Scrooge: Charles Dickens’ Christmas Carol Remix," the show’s cast featured not only current York students, but alumni as well as children from PS 176 Q, and a pastor (James Pressey) ably playing the lead character of the penny-pinching Ebenezer Scrooge. It was a feast for  audiences after nearly two years without live theater anywhere.

The hip-hop cadence of the show even included reggae rap and gave the large cast individual moments to shine. The child actors nailed their roles to the delight of the audience, which included numerous relatives and friends, helping to fill the seats at the Jamaica Performing Arts Center (JPAC). This latest York College theater production was a long time in coming as the COVID pandemic thwarted in-person performances throughout the shut-down period. The last previous play produced by the college was Shakespeare’s “Julius Caesar” in 2019. This was a show whose time had literally come -- and not a moment too soon.

“It was great fun to work with the students and children up-close and in person, and just what we all needed after almost two years of being online,” said Marion, Associate Professor of Theatre and Chair of the Performing and Fine Arts department at York College.

The next production on the agenda at York is "Guys and Dolls," to be directed by York alumna Miya Bass in late spring 2022.