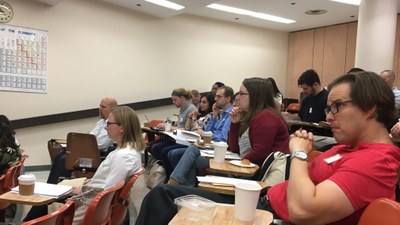 The one-day regional conference is designed to present research conducted about undergraduate mathematics students’ learning the foundations of math.

Dr. Lidia Gonzalez, Chair of the Department of Mathematics and Computer Science hosted the 2019 RUME function. “The conference planning committee included four individuals,” Gonzalez said. “Pablo Mejia, Keith Weber, Eileen Murray and myself; of the four, I am the only one at York College and so I was what is typically called the local organizer. The NE RUME conference is in its third year. Dr. Virginia Thompson and I each gave presentations at the previous ones. The event is hosted at a different college campus each year.”

The first Northeastern RUME conference was held at Montclair State University in New Jersey. The following year, in 2018, the second NE RUME function was at Rutgers University. Numerous math undergraduate and graduate students and professors gathered an abundance of knowledge from the research presented.

Mohamed Kane, a freshman at York, who plans to major in Pharmaceutical Science, was at the York event.

“I find the whole event fascinating because it was well organized [included] people from different communities with different opinions,” said Kane. “The program really benefited me. I would like to be more involved in the program in the future. The woman (Claire Wladis) that presented at the end was my favorite because at some point I thought she knows most of the mistakes students make when solving problems.”

The exposure of the math research at the NE RUME seemed to leave a valuable impression on the presenters, students, and faculty members.

“I would like them [students] to see some of the ways that faculty are engaged in research,” said Gonzalez. “And to make connections with faculty that may serve as mentors or with whom they could work more closely.”

Keith Weber, a Northeastern RUME founding member, and professor of math, at the Rutgers Graduate School of Education, created an experiential and networking conference to further assist math researchers.

“For people who are doing research and teaching mathematics, it’s kind of an unusual area [of study], undergraduate math education,” said Weber. “So, we wanted to have a place where people who did similar research could get together and talk about it. There is one conference at the national level.”

Keynote speaker was Claire Wladis, a university professor of math at the Borough of Manhattan Community College, is also a professor at the Graduate Center of the City University of New York, where she teaches urban education.

Wladis demonstrated her math models and approaches to the exploration of how undergraduate students made recurring errors in their academic mathematical problems. She also clarified the outcomes of her research, which was to analyze how students’ developmental thinking in math works.

The professors’ presentations were to illustrate how math teachers or tutors can be aware of the different learning techniques and strategies that students use in math. This also led the professors or tutors to determine a pattern of how students think when they solve a math question.

“We can define roughly as the extent to which students are (1) able to correctly interpret the existing syntactical structure of mathematical objects (e.g. expressions, equations),” said Wladis, according to the Proof Comprehension Research Group website. “And (2) use this structure, along with substitution and given mathematical properties, to generate equivalent objects.”

Mathematical objects are used to indicate the structure in a math sentence. Secondly, the mathematical properties is a term that must be defined in a given set in a math equation. Students can learn more about math research by participating in the Northeastern RUME program.

“York Students can consider a student membership to the Mathematical Association of America,” said Gonzalez. “They can also check the NE RUME website and attend the next conference! Students can learn about cutting-edge research in undergraduate math ed[ucation] as well as connect with researchers in the field.”

The attendees at the conference came from across the United States. There was one study abroad student, Anne-Sophie Stuhlmann, from the University of Hamburg, Germany.

Stuhlmann shared the outcome of the math examination that she had completed in “Ambiguities in linear algebra proof constructions involving the uniqueness quantification.” She researched more than one interpretation of how to solve linear algebra.

“In Germany, it is quite usual for students to collect data each week, so I collected my data on a tutor who is involved in these group activities,” said Stuhlmann. “The concepts of interaction in situations and the importance of Tara [a student] justify her claim. She proved the uniqueness and adjoined methods. The tutor understood Tara’s work not as how she meant it. People prove uniqueness differently.”

This math division, which Stuhlmann researched, deals with the rules of distribution in multiplication and addition. The constructive proof is recognized as a method to illustrate there is a mathematical object in the problem. There must be a method that will lead to the proof, which defines a math term that is stated in the question. Furthermore, there are several learning methods for students studying math.

“Students have a vested interest in how mathematics is taught at the undergraduate level as it affects them directly,” said Gonzalez. “So a conference focused on this should be of interest. More than that, however, the conference is part of the academic life of the college and gives students the opportunity to hear about cutting-edge research in the field. It also allows for students to meet with faculty members that they may learn from and possibly work with.”

The presenters and audience were from a broad range of research universities and liberal arts colleges that included West Point University, University of Memphis, Georgetown University, and the University of New Hampshire, among many others.

“We put out a call to people who have attended other math education events and people who are on the email list,” said Weber. “The email stated that we are having a conference and if you are interested in presenting send in a proposal. We try to help with graduate students doing research in the [math] area. So they can come and present their ideas for their research and we can give them feedback so that they could have better studies.”

The speakers introduced a diversified research collection of math topics. The presentations encouraged engagement with the audience that was based on research themes ranging from “Leveraging peer tutors’ and students’ insights to better support mathematics learning” to “challenges faced by adjunct instructors in implementing high cognitive demand tasks.” There were several other topics that students found challenging as well.

Zareen Rahman was a presenter who did research on cognitive learning for students. The cognitive demand is a function of how students use their thinking process to solve and understand certain math problems.

“[The] general model attempts to engage with how students think about (and use) many different types of formal written mathematical symbolism,” said Wladis, according to the Proof Comprehension Research Group website. “We see this model as representing a potential ‘big idea’ that could be used to link instruction across grades and domains, and shed light on many common student errors that have been well documented over the years in the research literature.”