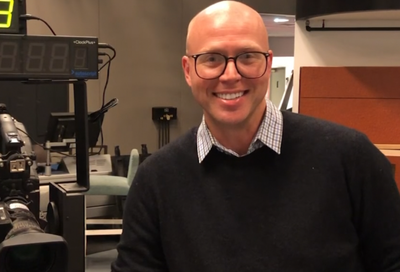 Based in York's Counseling Center suite, Dr. Vaigneur, who is also an adjunct lecturer in the Behavioral Sciences department, loves his job serving students with disabilities. But he is also committed to featuring people with disabilities and those who give them "space" in the world, on his TV program. Filmmaker Matt Ogens is one such person.

“I saw the film Audible and thought it was amazing," said Vaigneur. "I was very happy it was nominated for an Oscar and is doing so well on Netflix because this kind of documentary brings awareness to the disabled population – those teens in the documentary come across as football players first, then deaf students and this normalization is important to see."

He added that director Ogens has a connection to a deaf person, and was inspired by that close proximity to the deaf community through his friend.

"I had heard that the director, Matt Ogens, is not deaf but his best friend is, and this friendship was one of the inspirations for the film," said Vaigneur. "I had a blind cousin growing up and I was very close to her. Her being blind didn’t get in the way of our close relationship at all, actually it made our bond stronger."

Professor Vaigneur, said he "contacted Matt on Instagram and told him about my cousin, Donna, and he responded. He also agreed to be interviewed for my show, "Disabilities Redefined" with Dr. Vaigneur.' I was so excited. I mean he is an Oscar-nominated documentarian. The interview was great, Matt is super nice and I learned so much. I would highly recommend watching the interview as well as checking out the film.”  The documentary is titled Audible.

It is roughly seven minutes long.