Students in the Women's Center were asked to nominate and highlight "Women We Admire". They could be past, present (or future) leaders in our communities that we want to learn from and celebrate. 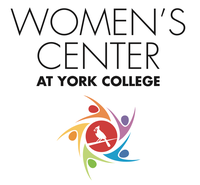 HopeLine
Turn your old phone into a HopeLine

YorkSAVES: Stop Domestic Violence
An initiative for students to empower other students to create and maintain healthy relationships, take a stand toward ending sexual assault and domestic violence and to minimize the impact of such events on survivors.