Two news films by Larry Tung, assistant professor in the Department of Performing and Fine Arts, are making the rounds in film festivals around the world.

Double Dads and One Queer Teen, a 25-minute documentary about a family of two fathers and a teenage kid whose preferred pronoun is "they," is a recipient of a PSC-CUNY Cycle 48 research grant. It will premiere at the Palm Springs LGBT Film Festival on September 22, and is also scheduled to screen at Florence Queer Festival in Italy, Durban Gay and Lesbian Film Festival in South Africa, and Q Cinema: Fort Worth’s International LGBT Film Festival in the fall.

Tung’s most recent film, "A Big Fat Taiwanese Same-Sex Wedding," is about an open-air mass wedding banquet in front of Taiwan’s Presidential Office Building held a day after the country passed Asia’s first marriage equality law. It will also premiere at the Palm Springs LGBT Film Festival on September 22, and is scheduled to screen at Florence Queer Festival in Italy, Humano Film Festival in Mexico, and Geneva International Queer Film Festival in the fall.

Larry Tung joined the York faculty in 2015 and teaches in the Communications Technology and Speech Communication programs. A native of Taiwan, he produces documentary films about human rights and social justice issues. His films have screened in more than 50 film festivals around the world. 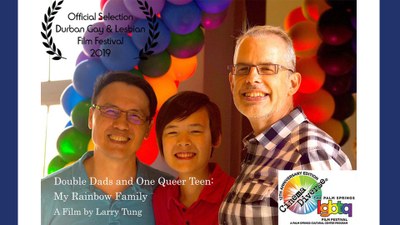