York College President Dr. Berenecea Johnson Eanes is one of six new members of the council who begin their four-year terms following the 2022 NCAA convention 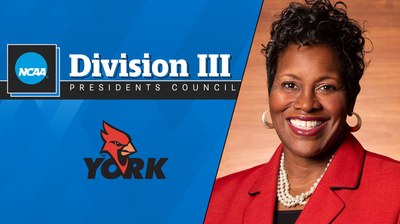 In my professional life, appointment to the NCAA Division III Presidents' Council is one of the great honors and an unexpected one," said Eanes. "When I was appointed President of York College in 2020, I did not expect that this additional honor was also in the cards for the near future as well. So not only is it a pleasant surprise, but an honor that is at once exciting and humbling.

Being on the NCAA Division III Presidents Council means York College has a seat at this important table in collegiate athletics, and I get to learn and participate in the decision-making that will impact all of CUNY and numerous other institutions throughout the state and nation. I get to contribute to establishing and directing the general policy of the Division, while also establishing Division III's strategic plan. Having this privilege is a joy and I am so thankful for the opportunity.

Dr. Eanes was appointed President of York College effective August 1, 2020 after serving as the Interim President for the 2019-20 academic year. The appointment signaled her return to CUNY, having previously spent six years as Vice President for Student Affairs at John Jay College (2006-2012).

Immediately prior to her York College appointment, Dr. Eanes served for seven years as Vice President for Student Affairs at California State University Fullerton, where she delivered leadership and oversight for university and student success programs under the guiding principles of ensuring that everyone working at the university has a role in student success.