Physics Major to be Valedictorian for York’s Class of 2019

The Physics Department at York College, CUNY is having a moment.

First they announced that two of their majors have received paid internships at Brookhaven National Laboratory for summer 2019; and now the valedictorian of the Class of 2019 has been selected from that department.

Tawhid Pranto, an immigrant from Bangladesh, has completed his BS in Physics in three and a half years of study; and earned acceptance to the CUNY Graduate School’s PhD program in Condensed Matter Physics. He did all this while building an impressive CV to include working in York’s Men’s Center, tutoring in the Physics and Mathematics Learning Center, helping students study for the MCAT and GRE Exams; helping under-represented community residents study for their GED exams, gaining experience as an adjunct lecturer in physics and much more.

As if that weren’t enough, Pranto also worked with Dr. James Popp during his freshmen and sophomore years to help build his lab protocols for synthesis and test parts of electron tracking detector which is in collaboration with the Mu2e experiment; and with Dr. Kevin Lynch in his junior and senior years in developing threat assessment system to detect contraband.

Pranto is also a member of the college’s Honors Program, part of the Astrobotics team, which has taken him to a NASA Robotics Mining competition in Florida; and is readying for a poster presentation in Buffalo, New York in late April. The busy scholar is also a Dr. Eugene Levin Scholar (named for a beloved, now retired-founding physics professor at York).

As a teenaged immigrant just moving to Jamaica, Queens in 2014 who finished his high school from Rajuk College, Bangladesh, Pranto asked relatives living in his neighborhood, for their opinion on local colleges. York came out on top and he visited the campus a few times, read the school newspaper, “Pandora’s Box” and with the support of his parents, made his decision.

“My parents are very supportive,” he says of his mother who was a nursing instructor at Dhaka Nursing College; and dad who was an officer of Janata Bank, Dhaka, Bangladesh.

Pranto, who is fluent in four languages – Bengali, Urdu, Hindi and English – has impressed his professors and appreciates their dedication to their students.

“I always wanted to do physics or engineering,” he recalled. “The faculty here helped me and gave me research opportunities. Professors [James] Popp and [Kevin] Lynch have mentored me and Professor Paglione has guided me throughout the selection of courses as well.”

In his referral letter for Pranto’s graduate school application, Dr. Paglione, the department chair at York, rates his student as one of the best he has ever taught, not only at York, but also at the CUNY Graduate Center, where he also has an appointment.

“Pranto stands out as one of the strongest graduate school candidates York has produced said Paglione, who has taught him in several advanced courses. “In his company are several CUNY students I worked directly with not only here but also at American Museum of Natural History (AMNH), who successfully completed the Columbia Bridge to the PhD Program, as well as those in Physics PhD programs around the country. So I know Pranto is of the caliber of student that can thrive and succeed in grad school. I advocated for him strongly for a number of fellowships and internships at York, which he well deserved. I similarly recommended him as an adjunct in his off-semester, and as chair, had no hesitation in hiring him.”

According to Paglione, in his nearly 20 years teaching at York, Pranto is the first physics major to be selected valedictorian. “The major, at York is small as it is throughout CUNY and the country,” Paglione explained.

Asked what is special about Pranto as a student, Dr. James Popp, one of Pranto’s dedicated mentors was quick with an answer.

“[Pranto] has all the right qualities for academic success, said Popp. “He has excellent study habits – he reads all the time. He has a natural knack for reading and understanding technical material in math, physics, and engineering. Tawhid is naturally curious about everything. It doesn’t matter what subject. He reminds me or me when I was his age. He is resourceful in and out of the lab and he likes a challenge.”

According to Dr. Popp, Pranto will master the PhD program with aplomb.

“He should have no trouble taking the usual preparatory courses for passing his qualifying exams,” said Popp. “He has the advantage of having Dr. Lynch and myself, as continued friends that can advise him on his selection of an advisor for his dissertation; as well as on other graduate school matters.”

And since it also “takes a village to raise a scholar,” there were faculty members in other departments who were also instrumental in Pranto’s success. He spent many hours in the Mathematics and Computer Science department being mentored by scholars such as Dr. Rishi Nath, who also provided a letter of reference to graduate school; Dr. Radoslaw Wojciechowski and other devoted faculty members.

In the meantime, Pranto may also not be the only member of his family to attend York when it’s all said and done. A younger brother has participated in the college’s summer research program and York is on the teen’s list for enrollment as a full-fledged college student as of fall 2019. Their mother is also considering coming to York to get certified as a nurse in the United States, following Tawhid’s graduation in May.

York’s 49th Commencement Exercises will take place on the campus’ athletic field on May 31. 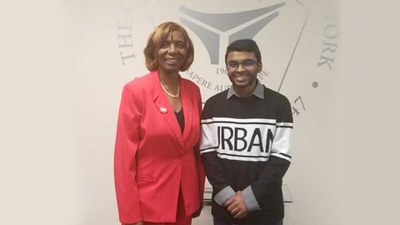