New York’s Governor Andrew Cuomo arrived at York College, CUNY early on February 24 to open what he had described as one of the largest vaccination sites in the state.

The registration link for vaccinations opened on Saturday, February 20 and by opening morning, registration was at 20,000, with a line snaking around the super block as eligible Southeast Queens residents queued up to receive their shot in the college’s Health and Physical Education Complex. The impressively staffed site is expected to vaccinate up to 3000 residents per day.

According to the governor, it was essential that such a site be opened in Southeast Queens to accommodate the people of Queens, but especially for residents in the 114 area code neighborhoods first. He views it as an act of social justice.

The super vac site, a collaboration between FEMA and the State, opened with a cadre of local elected officials and pastors in attendance to greet and thank the governor, who mentioned his own Queens childhood.

“It’s a pleasure for me to be home,” said a smiling Cuomo. “We are going to save lives at this site…at York College.”

Cuomo also referenced the healthcare disparity in communities of color, such as Southeast Queens, where COVID deaths have been disproportionately high. He vowed that this new site, in this location, is an effort to level the playing field for people usually not on the field.

Other brief remarks at the event were given by Assemblywoman Vivian Cook, who, welcomed the governor “home;” Senator Leroy Comrie, who demonstrated his trust in the safety of the vaccine by getting his first shot with the governor looking on; and Rev. Calvin Rice, senior pastor of New Jerusalem Baptist Church, who announced that he already got vaccinated and emphasized that he is perfectly fine.

York’s president, Dr. Berenecea Johnson Eanes arrived early and expressed her delight at the opportunity to have York provide space for the monumental task of vaccinating Queensites.

“We at York College are happy for the opportunity to serve in the Herculean task of vaccinating our people here in Queens,” said President Eanes. “ I want to thank Governor Cuomo for recognizing York as an important resource, not just as an outstanding institution of higher learning, but also as an important community resource for social justice.”

Councilmembers Adriene Adams, I. Daneek Miller and Assemblyman Khaleel Anderson and Pat Foy, chairman and CEO of the MTA, were also in attendance to witness the historic moment at York. 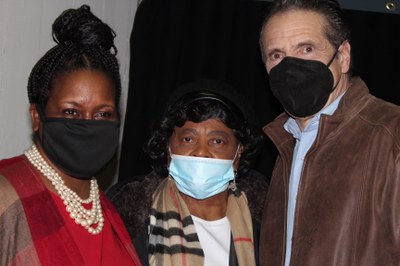