A Graduating Student Reflects on His York Journey

Georgios Messoloras was a shy teenager when he first arrived at York College, CUNY four years ago. 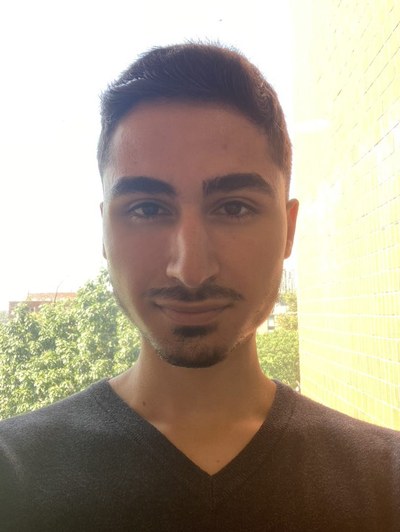 Today he is still “quiet” but has grown so much that he played a prominent role in the college’s recent production of the play, “Guys and Dolls.” Here in his own words, Mr. Messoloras, shares his experience in the play and as a York student. York is honored to have had him as a student and now an alumnus.

In the back of my mind, I was nervous about my performance, since I’m not a particularly talented singer [sang Frank Sinatra’s “Luck Be a Lady,” solo] and this was my first time ever acting in a play. Since this was my last Semester and I’d be heading off to graduate school very soon, I figured it would be nice to end my college career with one last hurrah.

This whole experience has been very insightful and transformative for me. As I stated earlier, this is my first acting role. Technically, I have been on stage before for two shows back in my elementary school years. But those were background roles, where I was essentially pantomiming. I’d pretend to be a fisherman, a farmer, or something to that effect. I wouldn’t have any speaking roles, or be involved in the plot in any direct, substantive way. However, not only was Guys and Dolls the first production I was in where I would actually speak, but I was also one of the main characters. Growing more comfortable with my character, becoming closer with the rest of the cast, and getting accustomed to the inner machinations of the theater, have given me a newfound love for acting. I would love to pursue more acting roles in the future because this was such an enjoyable part of my life. I actually hope to audition for the next play York is doing, while I commit to my first semester of graduate studies. I plan to attend Fordham University and pursue a Master’s Degree in Christian Theology.

I cannot express in words how much I loved my experience being a York student. Prior to enrolling, I was a confused 18 year old kid with no direction in my life. I didn’t understand the importance of higher education. But once I came to York, everything began to change for the better. Dr. Jonathan Quash reached out to me after my first semester and enlisted me to become part of York’s academic fraternity, PEK (Pi Etta Kappa). From there, I started working at the Men’s Center as a College Assistant. I was first affiliated with the Food Pantry as part of York’s “Hungry for Knowledge” Initiative, where in addition to distributing food, I would also produce some artwork advertising the Pantry. I eventually became more involved in the Mentoring side of the Men’s Center, where I learned how to improve my skills as a communicator and as a leader. Leading the Book Club also helped with that, as I became more acquainted with the intricacies of directing a group of students.

When it came time to consider my classes for my final semester, I only needed three credits before I was eligible to graduate. I learned from a staff meeting that my good friend and co-worker Miya Bass would be directing York’s next big theatrical production, “Guys and Dolls.” Moreover, I learned that if I’m a York student (which I am), I could actually get credit for being in the play. Even though I never acted in any meaningful capacity, I knew that this would be a very fun experience, and a great way to end off my college career.

The auditions were a very nerve-wracking experience. The assignment was simple. I had to sing a song I’d be comfortable with. But the weird thing about me is that I’m much more comfortable singing in Greek if I’m with others. There’s something about them not knowing what I’m saying that calms my nerves. I also think I sound better when I’m not singing in English, and I wanted to take whatever steps necessary to minimize my anxiety. I decided on two songs from the Church. One dedicated to Saint Alexander, and another dedicated to the Virgin Mary. I was pleasantly surprised that Miya and Professor Mark Adams thought I sounded well (because Lord knows I didn’t think so), and they told me to stay in touch.

I was overjoyed when I found out I landed the part of Sky Masterson. For the life of me, I can’t put my finger on what it was that made Miya think I’d be a good fit for the role. Perhaps it was the fact that she knew I’m very devout in my Christian beliefs, and the character of Sky becomes a firm believer throughout the play. Or maybe it was that Miya saw something in my personality that seemed as though it would translate over to the theater. But setting that aside, what I do know is that I’m so grateful to her for this opportunity, as I made so many new friends and became so much more confident in my ability to grow and adapt as a student.

The last day of performances was bittersweet. On one hand, it felt rewarding to know that I got through the tunnel of uncertainty with all the work I put it. On the other hand, it would be the last time I’d be on stage with this specific group, playing this character. But because I love acting so much, I plan to audition for more roles in the future. I’m so grateful to York College for these past four years. I couldn’t imagine what direction my life would’ve taken had I not gone here.

No matter what challenges I face in my life, I will always remember where I came from, and let that fire illuminate my path and guide me forward.