York College is included in CUNY’s "2012 Science All Star Team" ad featuring recent grads throughout the university, who have received prestigious scholarship/fellowships to graduate programs. Kirk Haltaufderhyde, ’11, the York graduate featured in the ad, was a mentee of Biology professor, Gerald McNeil. Kirk was recruited to Brown University by Dr. Andrew Campbell (York, ’81) a professor of Medical Science at the Rhode Island-based Ivy League.

After rotating through several labs, looking for the best fit as he began his predoctoral research at Brown University, Kirk Haltaufderhyde (York College, BS in biotechnology, 2011) became intrigued with research that is probing the role of photoreceptors in the skin.

Before his arrival, the laboratory of his mentor, Assistant Professor Elena Oancea, found that melanocyte skin cells - those in the epidermis that produce melanin, which affects skin color - detect ultraviolet light using a photosensitive receptor that formerly was thought to exist only in the eye. Oancea's team determined that the receptor rhodopsin lets skin protectively begin to tan within a couple of hours of exposure to UVA radiation, one of two types of ultraviolet light found in sunlight. Previously, melanin production was only known to occur days after exposure to the other ultraviolet type, UVB, had damaged DNA. Her lab is in Brown's Department of Molecular Pharmacology, Physiology and Biotechnology.

In a related finding, other scientists have found that photoreceptors in the skin help everyone - including blind people - keep normal, 24-hour cycles called circadian rhythms, such as awakening when the sun rises.

"This is really new, and it's exciting trying to figure out the mechanism of phototransduction outside of the eye," Haltaufderhyde says, referring to the bodily process that converts light into an electrical signal that's transmitted to the brain.

In the summer of 2010, he joined the lab of York Associate Professor Gerard McNeil, whose research focuses on the role of the RNA-binding protein Lark and its importance in early development; he uses the fruit fly Drosophila melanogaster as a model system.

Under his direction, Haltaufderhyde plunged into genomics research via the Genomics Education Partnership, a consortium of more than 50 colleges and universities that involves undergraduates in bioinformatics (using computers to study vast amounts of biological data, like genomes). He completed three original research projects on the genomes of Drosophila mojavensis and Drosophila grimshawi and is a coauthor on a manuscript that is in preparation.

Those projects, he says, involved the sequence improvement (finishing) and annotation of the gene-rich region of the fourth chromosome of several Drosophila species. This chromosome is thought to be mainly heterochromatic (consisting of tightly packed DNA). These results provide insight into gene structure, repeat types, densities and evolution in different species of this form of chromatin (the complex of DNA and proteins in the cell nucleus that is essential for maintaining chromosome structure).

"Working from an already well characterized D. melanogaster genome, we can use computer software to perform a comparative analysis of DNA sequences from other Drosophila species to detect genes of common ancestry," he says. "These are called orthologous genes."

Haltaufderhyde says that he "went to York because I was able to get close interaction with all the professors, and you might not get that at other institutions. To have the research experience with Doctor McNeil was definitely a turning point."

He is enjoying the change of scene in Providence, R.I. He adds that he's working toward a PhD "to discover something no one else knows."

What could be a bigger challenge than that? 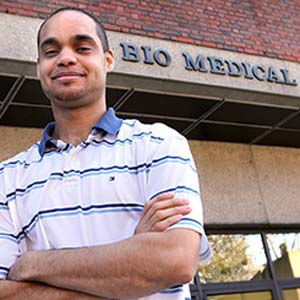